Trumpers Spent Millions on the Arizona Election Audit. All They Found Was More Votes for Biden. – Slate 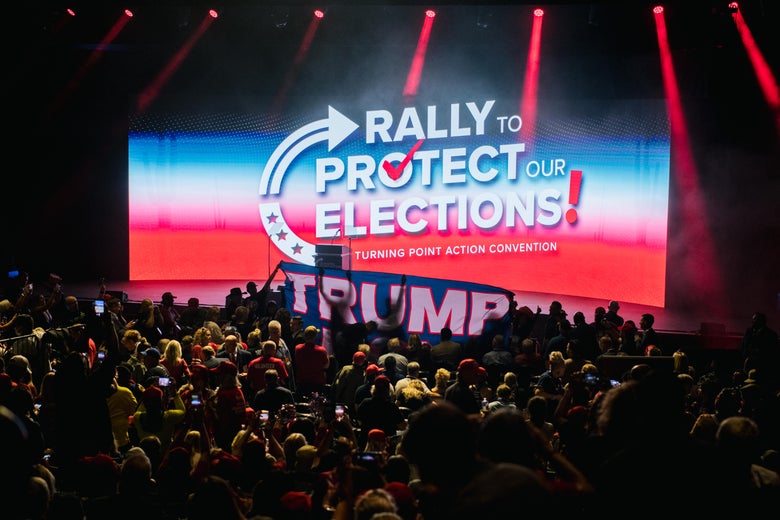 On Friday afternoon, the leaders of the unorthodox 2020 election audit in Arizona announced the results of their monthslong, Trump ally–sponsored hunt for voter fraud in Maricopa County, which Joe Biden won by fewer than 11,000 votes out of millions cast.

The timing of the release hints at the significance of the audit’s findings. For months, Donald Trump has been billing the investigation as the thing that will provide definitive proof of his victory in Arizona. If the audit was going to show that the election was stolen from Trump by Democratic goons in cactus-covered antifa ski masks, why release it late on a Friday afternoon at a time usually reserved for dumps of information people want to go uncovered?

A leaked report on Thursday evening offered an answer. The ballyhooed and controversially conducted hand count of nearly 2.1 million Maricopa County ballots still showed Biden defeating Trump, and though the margin changed by 360 votes it was actually Biden whose margin of victory grew from 45,109 to 45,469.

“This is yet the latest in a string of defeats for Donald Trump saying the election was rigged and fraudulent,” longtime Republican election attorney Benjamin Ginsberg said in a press call with the elections group States United. “[This] was their best attempt. This was an audit in which they absolutely cooked the procedures, they took funding from sources that should delegitimatize the findings automatically. This was Donald Trump’s best chance to prove his allegations of elections being rigged and fraudulent and they failed.”

It turns out that not even a partisan-funded and -conducted recount using procedures out of a Pee Wee Herman film could change the outcome. “The Cyber Ninjas couldn’t do the thing they were on the hook to do,” said co-chairman of States United Norm Eisen.

But that hasn’t stopped Trump and the Republican-led audit team from spinning the outcome. Using smoke and mirrors, the Arizona Senate’s audit team is claiming to have found tens of thousands of “anomalous” ballots based on spurious datasets, but these claims don’t hold up to the slightest scrutiny.

You would think that Trump himself would be decrying the audit as the latest fraudulent conspiracy against him by his greatest nemeses: vote counters. Instead, he issued a series of manic (and false) statements complaining that the “Fake News is lying about the Arizona audit report” and claiming that the audit had uncovered tens of thousands of “Phantom voters.”

“The leaked report conclusively shows there were enough fraudulent votes, mystery votes, and fake votes to change the outcome of the election 4 or 5 times over,” Trump claimed.

Trump appears to be citing the audit team’s claims that it found two “critical” issues with the vote count and several other smaller “anomalies.” First, that 23,344 mail-in ballots came from voters who “voted from prior address.” And second, that there were 10,342 “potential voters that voted in multiple counties.” Trump claims that these numbers added up, along with a handful of smaller claims around administrative voter roll errors, to more than total Biden’s margin of victory. Thus, he insists, “there is fraud and cheating in Arizona and it must be criminally investigated!”

There are many reasons to doubt Cyber Ninjas’ allegation that more than 23,000 voters cast illegal mail-in ballots from the wrong addresses. For starters, Cyber Ninjas compared voter rolls to an admittedly incomplete commercial public database of addresses, called Melissa, which is inaccurate for the purposes of checking voter rolls. “That’s not what the purpose of those databases is for. They’re not for establishing the residence of a voter in Maricopa County to vote,” Barry C. Burden, director of the Elections Research Center at the University of Wisconsin-Madison, said on the press call. “We don’t know how they get their data or what they do exactly, ” he added.

Indeed, that data, which Burden suggests is based largely on mail-forwarding requests that are by nature incomplete, was by Cyber Ninjas’ own estimates off by tens of thousands of votes. “86,391 individuals were found with no record in the database for either their name, or anyone with the same last name at the address,” the Cyber Ninjas draft report concedes. “It is expected that a number of these individuals are in fact real people with a limited public record and commercial presence; but it is unclear how large that number is.”

And yet Cyber Ninjas used this admittedly incomplete dataset to claim there are tens of thousands of what Trump is now touting as “phantom voters.” Critically, if Cyber Ninjas truly wanted to know where these voters lived and if they voted legally, they could have double-checked with official sources, like the Arizona secretary of state’s office.

“The Ninjas apparently did not make any type of attempt to do that,” said Benny White, a Republican veteran election analyst in Arizona, who has spent the past months double-checking Cyber Ninjas’ work. “They just published this report saying all this bad stuff happened. Well, maybe bad stuff happened, but maybe they didn’t do the investigation properly. I’m going to vote for the latter.”

Setting the bad data aside, there are a number of reasonable explanations for address changes, such as if people are forwarding their mail to a vacation home, or are back home from college, or are temporary caretakers of sick people in the midst of a pandemic. “They’re trying to spin as suspicious circumstances and findings that are not suspicious,” said Elizabeth Howard, one of the secretary of state’s observers of the audit and senior counsel in the Democracy Program at the Brennan Center for Justice at NYU Law.

Lastly, as the report notes, Arizona law allows voters to cast their ballots for president in Arizona if they move to a different state in the 29-day period preceding the election, the same period analyzed by Cyber Ninjas.

The “moved voter” claim is not even the biggest lie that Cyber Ninjas and Trump are holding up as proof of fraud. The group’s other “critical” finding was that there were 10,342 potential double voters, a claim which has already been debunked. The Ninjas claimed to have found these “double voters” by comparing the roughly 2.1 million Maricopa County voters to voters in other counties. Their analysis found more than 10,000 records with the same name and birthday.

The analysis has one fatal flaw. The audit team didn’t actually compare birth days and months, just birth years. In a dataset that large, there are statistically bound to be many, many people with the same name and the same birth year. It’s a phenomenon called “the birthday problem,” Burden, of the University of Wisconsin-Madison, said.

When White, the veteran election analyst, actually did the work of systematically  cross-checking the “double voters” in multiple counties against those counties’ databases, he found that they were not “double voters” as Cyber Ninjas and Trump have claimed. “I did check those records and in many cases I found that the people had different political party registrations, they had different voting histories, they had different occupations, so my summary of that is that they were in fact different people,” White told me.

Ultimately, the audit was funded with more than $5 million in donations from groups supporting Trump’s voter fraud lies (Trump himself reportedly looked into donating to the audit). The sham inquiry was also conducted by a man who has peddled false conspiracy theories that a dead Venezuelan dictator somehow had tampered with voting machines. The most meaningful revelation from the audit is that it found that Biden won by a greater margin than the actual, properly conducted count. And it is obviously unsurprising that such a partisan and untrustworthy affair has concluded that there was likely fraud based on completely fabricated findings.

Nevertheless, new audits aimed at overturning Trump’s loss are cropping up every day. Republican legislatures in states like Texas and Pennsylvania launched their own audits looking to replicate the disgraceful Arizona model.