Hoft’s account @gatewaypundit, which had over 375,000 followers, served as the outlet’s primary presence on Twitter. The ban comes one day after TGP posted election night surveillance video of Detroit’s TCF Center of what the outlet reports is a van dropping off “tens of thousands of illegal ballots,” after which “Joe Biden took the lead in Michigan.”

Oh shit they got my boss pic.twitter.com/seMjYSG8Bl

Following the ban, The Gateway Pundit said of the surveillance footage that they have “much much more on this incident to report on in the coming days,” as they have yet to release all of it. Hoft posted the following tweet hours before his suspension: 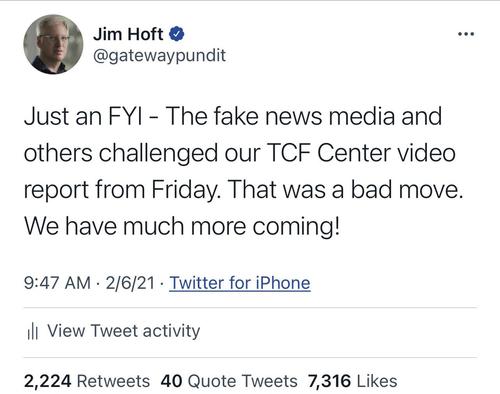 And while liberal Twitter celebrates Hoft’s banishment – and the founder of pro-censorship organization Sleeping Giants is now calling for their complete demonetization, The Gateway Pundit can still be found on the following platforms:

Previous post: [ Miami Mayor Speaks With Musk About Boring Tunnel Under Brickell Avenue ]
Next post: [ Mich. voter rolls being reexamined, thousands of names to be removed ]