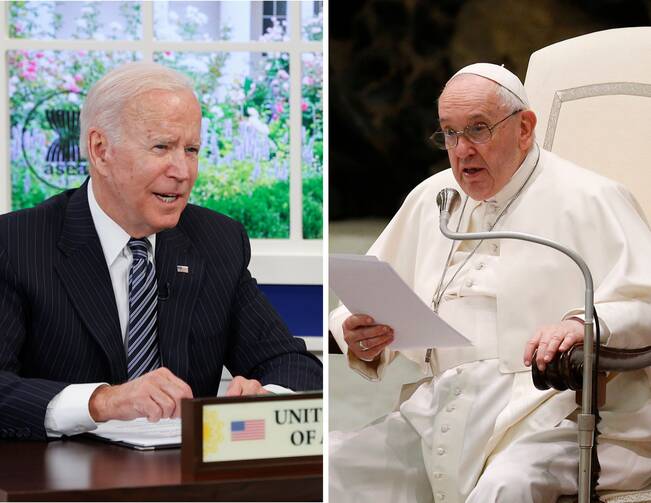 Whatever images emerge from tomorrow’s Vatican meeting between Pope Francis and President Joe Biden are likely to show definitively only that the two leaders met. But they will still be scrutinized and analyzed by Catholics eager to understand any impact the meeting might have on the conference of U.S. bishops beginning on Nov. 15, a gathering that could increase tensions between the U.S. episcopate and the nation’s second Catholic president.

Mr. Biden’s visit with Francis—the pair have met previously in both the United States and at the Vatican—will likely focus on issues where the pope and president share common ground. According to a White House statement issued earlier this month, that means discussion will focus on “efforts grounded in respect for fundamental human dignity, including ending the Covid-19 pandemic, tackling the climate crisis, and caring for the poor.”

A handful of U.S. bishops have also suggested topics that the pair might discuss. Bishop Thomas Tobin of Providence tweeted that he would like the pope to “challenge” Mr. Biden about abortion, and Cardinal Joseph Tobin, from Newark, tweeted that they might consider discussing nuclear weapons, which he called an “existential & moral threat.”

Biden’s visit with Francis will likely focus on issues where the pope and president share common ground.

The actual topics of discussion may be revealed by the Vatican’s press office, which will likely release a statement following the meeting scheduled to take place around noon Rome time.

Mr. Biden will be in Rome to attend the G20 Summit, held Oct. 30 to 31, before traveling to Glasgow on Nov. 1 to take part in the World Leaders Summit at the start of the United Nations’ COP26 conference on climate change. It is likely he and the pope will discuss the climate change gathering in some capacity, given their shared goals of reducing global carbon emissions.

Beyond policy, the meeting comes at a delicate time in terms of Mr. Biden’s relationship with bishops back home, who will meet in Baltimore in about two weeks. The bishops are expected to debate and vote on adopting a document about the Eucharist, which could contain a section addressing whether political leaders who disagree with church teachings should be denied Communion. When the bishops discussed the proposed document in June, some stated that they needed to draft a formal statement about the sacrament because of Mr. Biden’s support for legal abortion. Other bishops, including some on the committee drafting the statement, have said no individual political leaders will be named. And the two bishops who lead the dioceses where Mr. Biden lives, in Washington and Wilmington, D.C., have so far been reluctant to engage in the so-called Communion wars.

Ahead of the bishops’ meeting, there have been some signs from Rome that barring political leaders like Mr. Biden from Communion would be an unwelcome move.

Ahead of the bishops’ meeting, there have been some signs from Rome that barring political leaders like Mr. Biden from Communion would be an unwelcome move.

In October, Cardinal Peter Turkson told the news program “Axios on HBO” that “The Eucharist should not in any way become a weapon.”

“If you say somebody cannot receive Communion, you are basically doing a judgment that ‘You are in a state of sin,’” continued the cardinal, who heads the Vatican’s Dicastery for Promoting Integral Human Development.

When asked specifically if he thought Communion should be denied to President Joe Biden, Cardinal Turkson said, “No.”

Reaction to Mr. Biden’s meeting with the pope will likely center on speculation of how the pope feels about Mr. Biden.

In September, responding to a reporter’s question, Pope Francis said, “I have never denied Communion to anyone” and urged bishops to act as pastors rather than politicians. During the same press conference, the pope used harsh language about abortion, calling it “homicide.”

As for Friday’s meeting, the Vatican has scuttled plans to livestream the encounter between the pope and the president, but photos and video are likely to be released at some point. That was what happened earlier this month when Speaker of the House Nancy Pelosi met with the pope and other Vatican officials. Ms. Pelosi’s support for abortion rights had recently been criticized by Archbishop Salvatore Cordileone of San Francisco. But Ms. Pelosi, who frequently cites her Catholic faith, released a video of her laughing with Pope Francis during their visit.

Reaction to Mr. Biden’s meeting with the pope will likely center on speculation of how the pope feels about Mr. Biden. Whether any conclusions are reached, and whether they make a difference to U.S. bishops, remains to be seen.