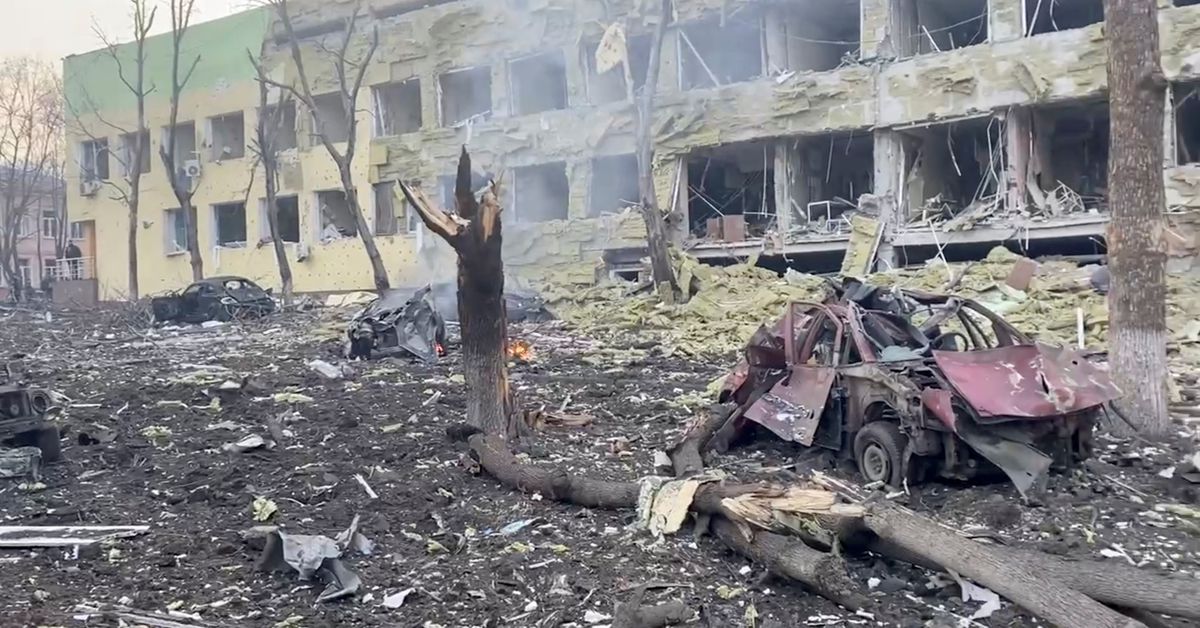 LVIV, Ukraine, March 9 (Reuters) – Ukrainian’s president accused Russia of carrying out genocide after officials said Russian aircraft bombed a children’s hospital on Wednesday, burying patients in rubble despite a ceasefire deal for people to flee the besieged city of Mariupol.

The attack, which authorities said injured women in labour and left children in the wreckage, is the latest grim incident of the 14-day invasion, the biggest assault on a European state since 1945.

The Mariupol city council said the hospital had been hit several times in what the White House called a “barbaric use of military force to go after innocent civilians”.

The destruction took place despite a Russian pledge to halt firing so at least some trapped civilians could escape the city, where hundreds of thousands have been sheltering without water or power for more than a week.

“What kind of country is this, the Russian Federation, which is afraid of hospitals, is afraid of maternity hospitals, and destroys them?” Ukrainian President Volodymyr Zelenskiy said in a televised address late on Wednesday.

Zelenskiy repeated his call for the West to tighten sanctions on Russia “so that they sit down at the negotiating table and end this brutal war”. The bombing of the children’s hospital, he said, was “proof that a genocide of Ukrainians is taking place”.

Kremlin spokesman Dmitry Peskov, asked by Reuters for comment, said: “Russian forces do not fire on civilian targets.” Russia calls its incursion a “special operation” to disarm its neighbour and dislodge leaders it calls “neo-Nazis.”

Ukraine’s foreign ministry posted video footage of what it said was the hospital showing holes where windows should have been in a three-storey building. Huge piles of smouldering rubble littered the scene.

The U.N. Human Rights body said it was verifying the number of casualties at Mariupol.

“The incident adds to our deep concerns about indiscriminate use of weapons in populated areas and civilians trapped in active hostilities in numerous areas,” said spokesperson Liz Throssell.

The Donetsk region’s governor said 17 people were wounded in the attack.

Ukraine accused Russia of breaking the ceasefire around the southern port, which aid workers and officials say is running out of food and water after days of Russian bombardment.

Russia blamed Ukraine for the failure of the evacuation.

Among more than 2 million total refugees from Ukraine, the United Nations Children’s Fund (UNICEF) said on Wednesday that more than 1 million children have fled the country since the invasion started on Feb 24. At least 37 had been killed and 50 injured, it said.

Around 48,000 Ukrainians have been evacuated through humanitarian corridors, Interfax Ukraine news agency said on Wednesday, citing a senior aide to Zelenskiy.

Debris is seen on site of the destroyed Mariupol children’s hospital as Russia’s invasion of Ukraine continues, in Mariupol, Ukraine, March 9, 2022 in this still image from a handout video obtained by Reuters. Ukraine Military/Handout via REUTERS

Ukrainian officials said while some had departed from certain locations, Russian forces were preventing buses from evacuating civilians from Bucha, a town near Kyiv.

The International Committee of the Red Cross (ICRC) said houses had been destroyed all across Ukraine. “Hundreds of thousands of people have no food, no water, no heat, no electricity and no medical care,” it said.

Thousands continued to flood into neighbouring countries. After hiding in the basement to shelter from Russian bombing, Irina Mihalenka left her home northeast of the Black Sea port of Odessa, she told Reuters in Isaccea, Romania.

“When we were walking, a bridge was blown up. And when we crossed over the wreckage, because there was no other way out, there were corpses of Russian people (soldiers) lying there,” she said.

Russia has been hit by Western sanctions and the withdrawals of foreign firms. Nestle, cigarette maker Philip Morris and Sony on Wednesday joined the list of multinationals stepping back from the country.

The World Bank’s chief economist said Moscow was edging close to defaulting on its debt. The Kremlin is taking measures to shore up the economy and planned to respond to a U.S. ban on its oil and energy exports as the rouble dropped to record lows.

There was not much hope for diplomacy as Russia’s Foreign Minister Sergei Lavrov arrived in Turkey ahead of talks on Thursday with Kuleba in what will be the first meeting between the pair since the incursion.

Ukraine is seeking a ceasefire, liberation of its territories and to resolve all humanitarian issues, Kuleba said, adding: “Frankly … my expectations of the talks are low.”

Moscow demands that Kyiv take a neutral position and drop aspirations of joining the NATO alliance.

Zelenskiy told VICE in an interview on Wednesday that he was confident Putin would at some stage agree to talks. “I think he will. I think he sees that we are strong. He will. We need some time,” he said.

The West says Russia is inventing pretexts to justify an unprovoked war. Russian President Vladimir Putin has called Ukraine a U.S. colony with a puppet regime and no tradition of independent statehood.

Russian forces hold territory along Ukraine’s northeast border, the east and the southeast. Fighting has taken place in the outskirts of Kyiv, while Ukraine’s second city Kharkiv is under bombardment.

A Russian assault force is stalled north of Kyiv and Western countries say the Kremlin has had to adjust its plan to swiftly topple the government.