Ukraine’s Zelenskiy tells EU: ‘Prove that you are with us” – Reuters 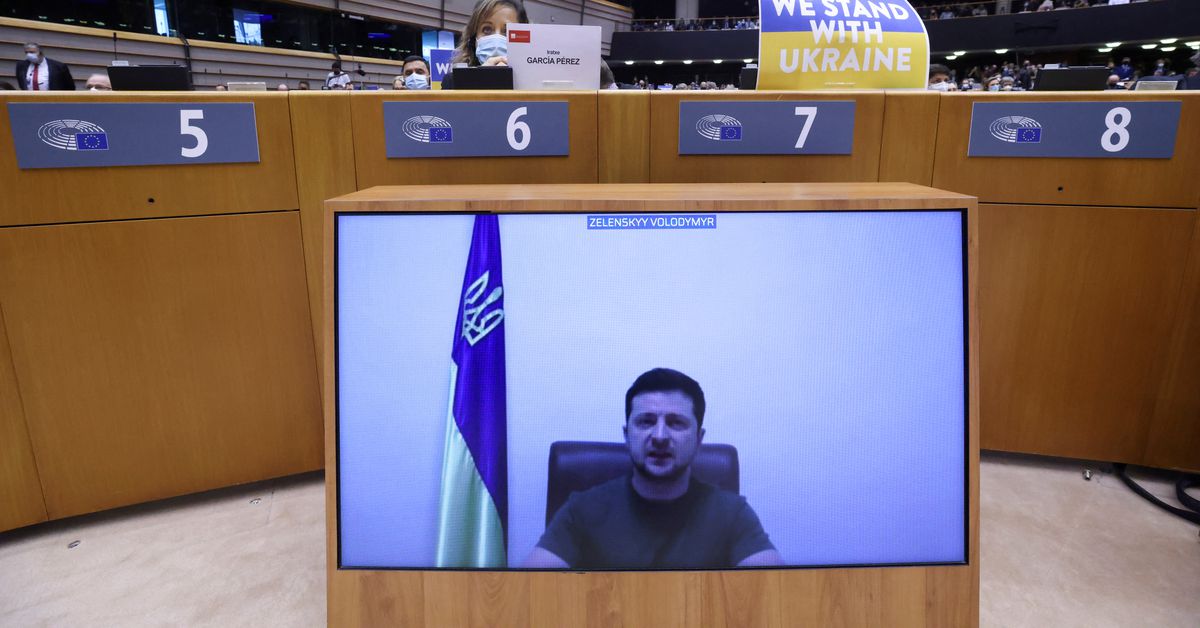 BRUSSELS, March 1 (Reuters) – Ukrainian President Volodymyr Zelenskiy urged the EU on Tuesday to “prove that you are with us” in Ukraine’s war with Russia, a day after Kyiv officially asked to join the bloc. read more

European Union lawmakers, many wearing #standwithUkraine T-shirts bearing the Ukrainian flag, others with blue-and-yellow scarves or ribbons, gave Zelenskiy a standing ovation as he addressed the European Parliament via video link.

“We are fighting to be equal members of Europe,” Zelenskiy said in Ukrainian in a speech translated into English by an interpreter who spoke through tears.

Zelenskiy has remained in Kyiv to rally his people against the invasion. As he spoke on Tuesday, a Russian armoured column was bearing down on Ukraine’s capital. read more

“We are (with you),” European Commission vice-president Maros Sefcovic responded, stressing that the EU would provide Ukraine with weapons, on top of slapping unprecedented sanctions on Russia after it invaded Ukraine last week. read more

“And we will be with you to rebuild your beautiful country after your victory,” he said.

The presidents of eight central and eastern European nations on Monday published an open letter calling for Ukraine to be granted immediate EU candidate status and for the start of formal membership talks. read more

Ukraine is well aware, however, that any membership process will be long and difficult, even if it manages after the war to avoid falling back under Moscow’s domination. read more

Charles Michel, the chairman of EU leaders, told the EU Parliament after Zelenskiy’s speech that the bloc would have to seriously look at Ukraine’s “legitimate” request to join.

But he added: “It is going to be difficult, we know there are different views in Europe (about further enlargements).”

According to the draft resolution and amendments backed by the assembly’s main parties, lawmakers will call for tougher sanctions “aimed at strategically weakening the Russian economy and industrial base, in particular the military-industrial complex”.

While Russian President Vladimir Putin “recalls the most dreadful statements of 20th century dictators”, Zelenskiy is being “heroic”, the draft of the non-binding resolution said.

The European Parliament will also urge EU leaders to be tougher on oligarchs and officials close to the Russian leadership, restrict oil and gas imports from Russia, ban Russia and its ally Belarus entirely from the SWIFT bank messaging system, and to close all EU ports to Russian ships or ships headed to or from Russia.

However, in a preliminary vote on amendments, EU lawmakers rejected calling Russia a “rogue state”.

Russia calls its actions in Ukraine a “special military operation” aimed at ridding the country of leaders it characterises as “neo-Nazis and drug addicts”.

“If Putin was seeking to divide the European Union, to weaken NATO, and to break the international community, he has achieved exactly the opposite,” von der Leyen told the EU Parliament, a blue and yellow ribbon pinned to her jacket.