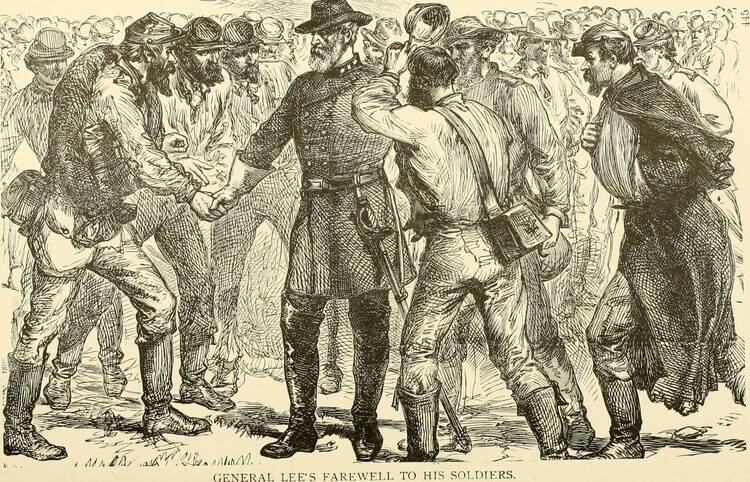 A Homily for the Seventeenth Sunday in Ordinary Time

Call him the greatest general America has ever produced or a traitor to his country—a case can be made for both—but all who met him say that Robert E. Lee was a self-composed, gracious man. If, on a rare occasion, Lee was harsh, most men blamed themselves rather than the general.

In April of 1865, as Lee’s worn army arrived at Appomattox Station, it was not obvious that the war would soon end. Philip Sheridan’s Union calvary stood between Lee and his supplies, but perhaps they could be broken. Or perhaps Lee would order his army to disperse into armed guerilla groups, leading to months, or even years, of more killing.

But as Allen C. Guelzo records in the newest, less adulatory biography, Robert E. Lee: A Life(2021), Lee remained himself.

All the while, Lee tried to keep up appearances of good order: a “young officer” reported to him with one pant leg hanging carelessly out of his boot, which Lee sharply compared to “a huge misshapen bologna sausage.” The officer “turned blood-red at the rebuke,” but Lee hastened to add that he merely wanted his officers, “especially those who were near the persons of high commanders, to avoid anything on a retreat which might look like demoralization.”

At that point, the Army of Northern Virginia had dwindled to fewer than 30,000 soldiers. Its future seemed foreclosed, but that was Lee’s genius and his greatest virtue: He always remained open to whatever would come. Lee understood that even the last moments matter; indeed they matter the most because we never know with certainty that these are indeed the last moments. For once you no longer believe that you have a future of promise, you forfeit all its possible blessings.

We call hope a theological virtue because, in possessing it, we touch something of God.

This is the theological virtue we call hope: remaining open to what will come, to whatever God determines. And what that might be, we truly do not know, no matter how certain we might think that we are. We call hope a theological virtue because, in possessing it, we touch something of God.

As its creator, God is not constrained by time. Past, present and future are as one to God. But we who live in time must stand ready to receive our Lord in the moment that is coming. We belong to him; so, too, does our future. And if our time has truly come to the close, then how the Lord finds us at the end matters the most. Why? Because faith tells us that God knows no end. God’s saving strength, the moment God is most fully God for us, begins when our power has inevitably ebbed.

Abraham never makes the mistake of claiming to know the designs of God. He continues to pray, long after patience itself would have called it quits. This is hope. This is remaining open to God’s future for us and not presuming that we know the mind of God.

In hindsight, we take for granted that force of arms would have compelled the end of the Confederacy, but during the conflict what seemed more probable was some negotiated settlement. Until Lincoln’s reelection, even Northern citizens were beginning to believe that a new country on the continent was better than endless bloodshed.

Ulysses S. Grant, the Union general whom Lee would meet at Appomattox, was already known as U.S. Grant, the first two initials of his name now standing for what he had consistently demanded in the western theater of the war: unconditional surrender.

It is not for us to know or to judge the designs of God. Our task is to remain open to them, to surrender to them. This can only be done through prayer.

There would be no conditions under which Lee would meet Grant. When the assault on Sheridan’s position failed, Lee finally admitted, “Then there is nothing left for me but to go and see General Grant.” For once, speaking only for himself, he added, “I would rather die a thousand deaths.” Yet when they met:

what Grant sketched out took Lee gratefully by surprise. Grant proposed to receive the surrender of the Army of Northern Virginia, but immediately to parole all who surrendered there—no triumphal parades, no trials—and to permit all officers to keep their side-arms (no humiliating turning over of officers’ personal weapons as tokens of defeat), and, at a suggestion from Lee, to allow any Confederate soldiers to take home an army horse or mule for “planting a spring crop.” (One of Grant’s officers, when Grant mentioned “their spring crops,” thought the remark worth noting, because it “demonstrated more completely his idea that the war was over, and that these warlike men and horses would go at once to work planting corn.”) Lee was overcome with relief. “This would have a happy effect upon his army,” he declared. The terms written out, and after Charles Marshall drafted a brief acceptance letter, Lee signed it. No unconditional surrender after all.

Our Lord knew that we would pray and sometimes feel unheard. He nonetheless told us to keep praying, to hope. It is not for us to know or to judge the designs of God. Our task is to remain open to them, to surrender to them. This can only be done through prayer.

I tell you, ask and you will receive;

seek and you will find;

knock and the door will be opened to you.

For everyone who asks, receives;

and the one who seeks, finds;

After the war, when Lee had become the highly successful president of the then-obscure Washington College in Lexington, Va.,—now known as Washington and Lee University—a crippled veteran knocked at his door, asking for assistance, which the old general promptly rendered to him. A colleague later asked Lee in what unit of the Army of Northern Virginia the man had fought. The general quietly answered, “he fought on the other side.”