Understanding the invalid baptism controversy: A guide for Catholics 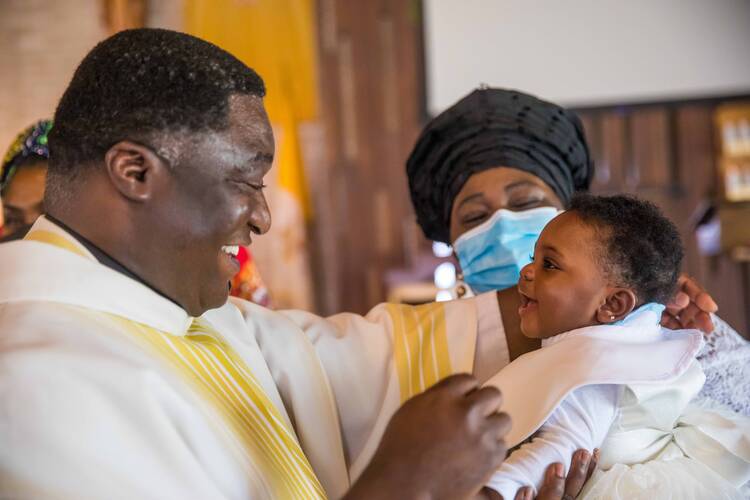 In February, the Diocese of Phoenix announced that thousands of infant baptisms that had been performed by a local pastor were in fact invalid as a result of one incorrect word. In the official rite of baptism, the baptizing priest is required to say, “I baptize you in the name of the Father, the Son and the Holy Spirit.” But in Phoenix, the priest had instead been using the first person plural pronoun, “we,” seemingly to indicate that the priest was baptizing the child on behalf of the entire Catholic community.

The announcement, along with the pastor’s resignation, devastated many in his parish and clearly confused Catholics everywhere else, as they wondered what exactly this meant for them and the church. Could their own baptisms or weddings suddenly someday be declared invalid in this way?

Let’s dig into it.

What exactly is the problem with what the priest did?

In 2020, the Congregation for the Doctrine of Faith considered the question of whether a priest could modify the official formula used in the rite of baptism, after receiving reports that there were lots of variations occurring along the lines of what was happening in Phoenix. As our own Molly Cahill reported at the time, the C.D.F. said quite clearly: No, that formula cannot be changed in any way.

In its response, the C.D.F. acknowledged that the modifications being questioned seemed to be coming from a desire to express the “communitarian significance of Baptism,” “express the participation of the family and those present” and “avoid the concentration of a sacred power in the priest to the detriment of the parents and community.”

In February, the Diocese of Phoenix announced that thousands of infant baptisms that had been performed by a local pastor were in fact invalid as a result of one incorrect word.

But, they explained, these sorts of instincts actually misunderstand what is happening in the rite itself. “The Second Vatican Council,” they wrote, “states that: ‘when a man baptizes it is really Christ Himself who baptizes.’” In the baptismal rite, the person baptizing is literally standing in for Christ, and therefore he must say “I” and not “we.”

There are nuances and complexities buried beneath this response, however.

First, the Catholic Church recognizes the baptisms of other Christian communities. For instance, in 2013 Cardinal Francis George of Chicago represented the U.S. Conference of Catholic Bishops in co-signing the “Common Agreement on Mutual Recognition of Baptism” with a number of other Christian communities; in the agreement, the five churches agreed that “For our baptisms to be mutually recognized, water and the Trinitarian formula ‘Father, Son, and Holy Spirit” (Matthew 28:19-20) must be used in the baptismal rite.”

Second, as the sacramental theologian John Baldovin, S.J., noted in our 2020 report, there have been other baptismal formulas that have been considered acceptable within the history of the church. Even today, some Eastern Catholic churches in union with Rome use a different formula, one that includes no pronoun for the priest at all: “The servant of God (name) is baptized in the name of the Father, and of the Son, and of the Holy Spirit.”

In the baptismal rite, the person baptizing is literally standing in for Christ, and therefore he must say “I” and not “we.”

That being said, Father Baldovin also pointed out that the C.D.F. most definitely has the authority to declare a variation on the formula to be invalid.

That’s what happened in Phoenix. The Rev. Andres Arango, who had served a number of parishes in Phoenix over the past 16 years, had been unwittingly using the wrong formula throughout that time. Last summer, he was made aware of the fact that what he had been doing was wrong. Now all of the baptisms he did have been declared invalid.

What does it mean to say those baptisms are invalid?

The main answer, in the eyes of the church, is that those baptisms do not officially count as baptisms and have to be done all over again. This is not the first time this issue has come up in recent years, and the consequences can get pretty dizzying. In 2020, the Rev. Matthew Hood, a priest in Michigan, discovered while watching a home video that his own baptism had been done using an invalid formula, which meant not only that his own baptism and ordination were invalid but also that all of the baptisms, weddings and other sacraments that he had ever performed as a priest were invalid.

[Interview: Father Matt Hood, the priest who discovered he was invalidly baptized (and ordained)]

But as Father Baldovin pointed out in 2020, “invalid” is not the same as “unreal.” Our mistakes do not prevent God from entering into a moment any more than our sins do. In the wake of Father Hood’s case, Archbishop Allen H. Vigneron of Detroitwrote,“The Church, following the thought of St. Thomas Aquinas, recognizes that God has bound Himself to the sacraments, but He is not bound by the sacraments.” Obviously, a priest making this mistake should be corrected. But God’s ability to have overcome that error and been present in the sacrament should also not be underestimated.

Is doing this to all of these families really necessary? And could it happen to me?

Does it really make any sense that thousands of families now have to have their children rebaptized? Or, for that matter, that a priest who discovered an error from over 20 years ago would have to get rebaptized, reordained and all his baptisms and weddings redone?

These are not questions of mere inconvenience. When the church proceeds in this way, we are not just saying a piece of paper was filed wrongly or needs to be filled out again. We are tarnishing parents’ experience of a precious moment in their family’s life. It is like an annulment but without any consultation with the actual people who were present at the event. It is deeply confusing.

It can also be frightening. While the church understands baptism as a rite of entrance into the Catholic community, many Catholics think of it as a rite of protection as well. God’s blessing of an infant is understood as a kind of ward of safety.

While the church teaches that baptism is indeed necessary for salvation (Catechism, No. 1257), God does not need us to complete a ritual in order to care for our children.

Theologically, this is problematic at best; while the church teaches that baptism is indeed necessary for salvation (Catechism, No. 1257), God does not need us to complete a ritual in order to care for our children. But it is part of how the Catholic Church has historically talked about baptism. It was not that long ago that Catholic catechetical instruction included the belief that infants who died before baptism “will go to some place similar to limbo, where they will be free from suffering, though deprived of the happiness of heaven” (Baltimore Catechism, Q. 632). One can still find traces of that teaching in some places today.

For many ordinary Catholics, vestiges of that way of thinking remain active. To be told now their children are unbaptized is to be told they are at risk or in danger. What if the unbaptized person has since passed away? What are the parents to think then?

Harry Potter and the parents of toddlers

It strikes me that there really are two schools of thought about what has happened in Phoenix, and maybe about sacramental theology in general. And while they seem opposed, they can be complementary.

On the one hand is what David Gibson, the director of Fordham University’s Center on Religion & Culture, has coined “Saint Hogwarts Seminary.” In this way of thinking, prayers and rituals are very much like magic spells. You have to say and do them exactly right or they do not “work.”

The C.D.F.’s concern is not “getting the words just right” per se but a proper expression of the ritual itself.

As indicated above, the heart of the C.D.F.’s concern is not “getting the words just right” per se but a proper expression of the ritual itself. The priest doing the baptizing does not stand in place of the community but in place of Christ, the one who baptizes. Therefore, the C.D.F. explains, to say “we” instead of “I” is not the rite of baptism.

Given that the issue is an alteration in a single word—and in this case, from a priest who did not even know he was saying it wrong in the first place—it appears to some as a sort of theology as incantation. But the point being made is that baptism, as a sacrament, is a moment in which we have come to believe that God is present in a special way. Insisting on details like the exact wording of the formula are ways of expressing just how uniquely important and sacred this moment is.

The other approach emphasizes instead a spiritual pragmatism. God is bigger than us. He can deal with our mistakes; sometimes it is in the imperfections that the greatest grace and beauty is found. Also, nullifying thousands of baptisms is a pastoral nightmare that creates far more problems than it solves.

Yes, this guy screwed up. We should correct him and not do that again. But that is as far as things actually need to go. God was there. He welcomed those children.

It is much the same approach that experienced parents learn to live by. Little kids run into walls, get into the refrigerator in the middle of the night, eat dirt or pull their sisters’ hair, and usually it all ends up O.K. That is not to say the parents do not put safeguards in place. They install barricades so their kids do not try to climb downstairs, have child-safe foam protectors on the corners of tables and try to make sure everyone has naps so they are less likely to attack one another. But they also learn over time where their energies are best spent and when to have greater trust.

Parish life is very similar. As a pastor or a member of a parish staff, you can offer liturgical guidelines and expectations, but mistakes and moments otherwise unexpected are still going to happen. And sometimes they are even going to be the best parts of the whole thing, the moments God really shines through. You learn to pick your battles and trust in God. After all, he called us together in the first place and promised his Holy Spirit would be there helping us even (if not especially) when we didn’t know it.

The “parents gang” might say the Hogwarts bunch are too uptight and superstitious, but the latter group is trying to express important guard rails and preserve unity in the church. You cannot just say and do anything and still call it a baptism. (Sacred Heart radio producer Gail Finke said it would be like using ketchup instead of water, which is just about the most horrifying image of baptism I can possibly imagine.)

The Hogwarts bunch might say the parents are too permissive or even heretical. But the parents crowd also believes in safeguards and correction. They do not see God’s existence and power as a hall pass or get out of jail free card. But they do think it means something meaningful in liturgical situations. Yes, this guy screwed up. We should correct him and not do that again. But that is as far as things actually need to go. God was there. He welcomed those children. We know it not only because all those families experienced it but because that is who God is.

To dismiss all that, these parents might say, and instead demand that thousands of people accept that their children’s baptisms did not “count” only confuses matters a whole lot more, and not just for them.