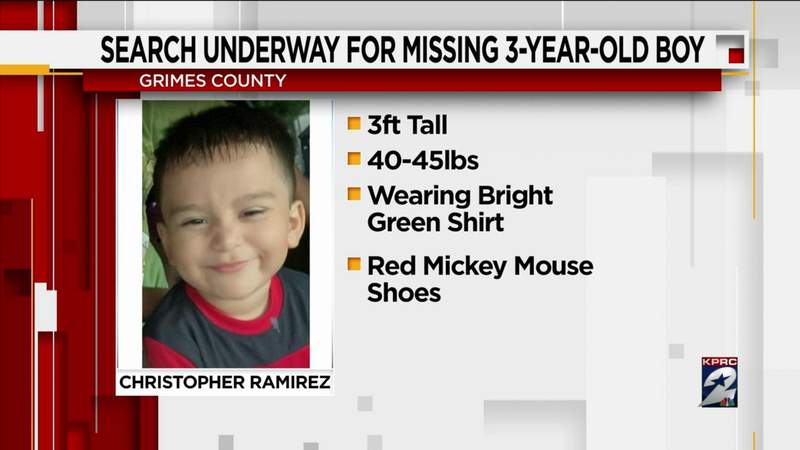 Deputies said the toddler has been missing for what is going on the third day in Grimes County.

“Our search is unfortunately at a standstill,” he said to reporters.

During a press conference Friday morning, Sowell said with the Texas Renaissance Festival happening this weekend, the search efforts may be delayed due to heavy traffic in the area.

Sowell said to reporters they are expanding slowly starting with the area Christopher was last seen. He also said part of their group is also criminal investigators but haven’t identified a person of interest as of yet.

Araceli Nunez, Christopher’s mother said in a press conference Thursday she believes her son was kidnapped. At this point, Sowell said there are no signs of foul play or abduction and they’re looking at all possibilities.

Hundreds of volunteers, police, fire, the FBI and rescue agencies are continuing to search for the little boy. On Thursday, Sowell said crews have canvassed 4.5 miles at least five times in search of the boy.

Sowell said he is optimistic about finding the toddler and says crews will expand the search if necessary.

“If we have intelligence and if it leads us that way, but right now we are focused on the immediate area. We are looking a day later and there is nothing that shows us at this point that there are signs of foul play or abduction,” Sowell said.

Christopher was last seen wearing a bright green shirt, shorts and red mickey mouse shoes. Deputies with the Grimes County Sheriff’s Office were dispatched to the 10000 block of Deer Park Lane around 1:30 p.m. on Wednesday and started searching for the Ramirez.

The child’s family told deputies Christopher disappeared moments after returning home with his mother and grandmother — the trio had been out running errands. As the women were unloading the car, the boy chased a puppy out of sight of the adults. When the puppy returned and the boy did not, the family and their neighbors began searching for him. After about 20 minutes with no luck, the family contacted the sheriff’s office for assistance.

Deputies, assisted by multiple K-9 units, responded and conducted a ground search through the evening and into the night. Several additional agencies and volunteer groups joined the search.

Sowell said that the search party has inspected several water tanks and reservoirs in the area. Deputies have also gathered and reviewed surveillance footage, and drones and helicopters have also been used to survey the area.

Anyone with information about the child’s whereabouts is urged to contact the Grimes County Sheriff’s Office at 936-873-2151.