The Uvalde cop who was caught on video nonchalantly using hand sanitizer inside the Robb Elementary School as children were dying in a nearby classroom has been identified.

Sheriff’s Deputy Eric Gonzales — who faced intense backlash for the bizarrely timed act — was IDed by the Daily Mail as a one-time recipient of a medal of valor for “bravery in the line of duty.”

The 30-year-old cop, who was wearing a helmet and bulletproof vest, casually pumped the hand sanitizer wall unit to clean his hands as officers milled around the hallway for more than an hour before taking out the shooter, the footage first obtained by the Austin-American Statesman showed.

Viewers of the 77-minute clip were outraged by the officers’ retreat and hour of inaction as 18-year-old gunman Salvador Ramos slaughtered 19 children and two teachers.

“[S]o let me get this straight. Uvalde officers were inside within five minutes, stood around for over an hour, made sure to get HAND SANITIZER … while still hearing rounds being fired and the kids screaming,” Kayce Smith, a Barstool Sports media personality, tweeted. “What the F— are we doing here?? This is revolting.”

“Would love to hear from this Uvalde cop why he was worried about putting on hand sanitizer while a shooter was massacring kids twenty feet down the hall,” tweeted Cabot Phillips, a senior editor at the Daily Wire, a conservative outlet.

Tap the right side of the screen below to watch this web story: 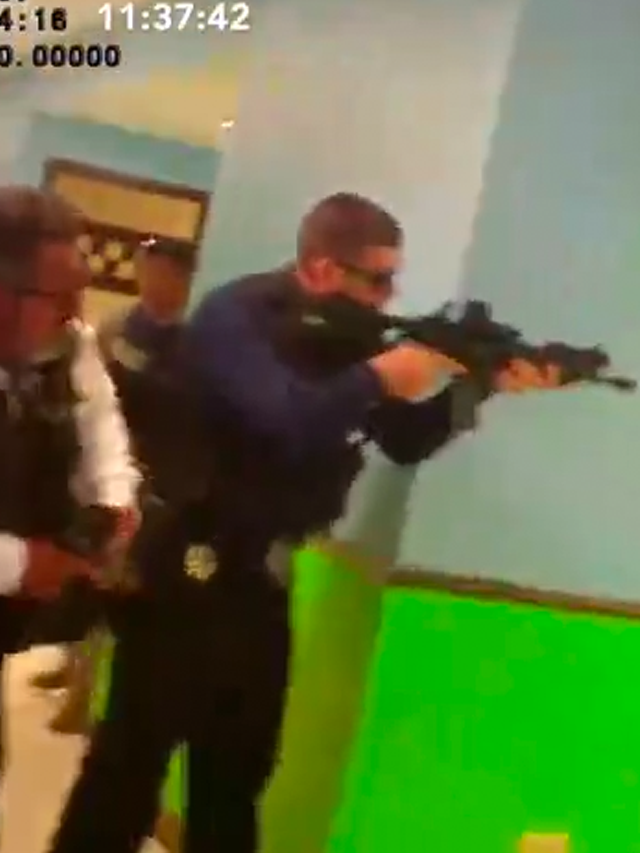 Ironically, Gonzales was awarded a bronze star for valor and bravery in the line of duty in December 2020 after he exchanged gunfire with a man during a traffic stop, according to the Uvalde Leader News.

The Uvalde County Sheriff’s Office didn’t immediately respond to a Post inquiry. However, Sheriff Ruben Nolasco told the Daily Mail that Gonzales was sanitizing his hands in preparation to assist medics in tending to injured victims.

However, no medical team can be seen near the deputy in the video.

A special Texas House panel investigating the May 24 mass shooting and police response concluded that the nearly 400 cops who showed up to the deadly scene “failed to prioritize saving innocent lives over their own safety” in a scathing new report.

“No amount of hand sanitizer is going to wash off those hands in Uvalde. None,” tweeted Jack Posobic, senior editor of the conservative news site Human Events.