Video of police standoff with Tekle Sundberg captured moments his father begged him to talk to negotiators – FOX 9 Minneapolis-St. Paul 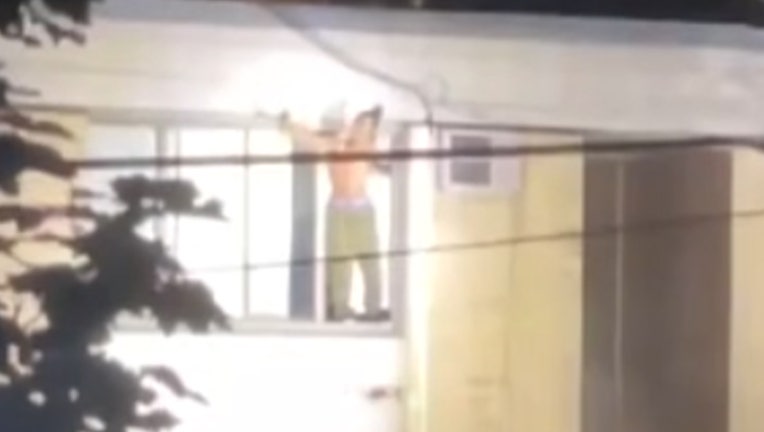 A screen grab of a live stream of the standoff between Tekle Sundberg and Minneapolis Police shows Sunderberg standing on the ledge of this third floor apartment window. (FOX 9)

MINNEAPOLIS (FOX 9) – A live stream of the standoff between Tekle Sundberg and Minneapolis police captured a heart-wrenching moment when Sundberg’s father begged his son to talk to police negotiators only two hours before he was fatally shot by Minneapolis police snipers.

The video also seems to show that, at least for the two-hour period it captured, police negotiators never successfully made contact with Sundberg despite repeated attempts and that police at the scene remained calm, with a group of what appeared to be SWAT team members frequently congregating by the front entrance to the building.

The standoff began at 9:30 p.m. Wednesday after Sundberg allegedly shot into the apartment where a mother lived with her children and then fired again at officers who were rushing the family to safety. It ended about six hours later, at 4:30 a.m when two police officers shot Sundberg.

This video, filmed by a user of the Citizen App, starts at about midnight on Friday and runs to 2:30 am. It captured two moments when Tekle Sundberg’s father, Mark Sundberg, picked up a bullhorn to address his son.

The first occurs at 2:10 a.m. By that time, police had spent the last two hours repeatedly asking Sundberg to pick up his phone and speak with negotiators.

He had stepped out onto the ledge of the third-floor apartment window on two occasions. First, at around midnight, he gestured at officers and spoke quickly and mostly unintelligibly, at one point repeating the word “no” in a rapid sequence before going back into the apartment. Then, about 20 minutes later, he stepped out again to take several selfies before returning to the apartment.

An MPD officer alternated between broadcasting one of two messages over a loudspeaker every few minutes. One message said they had a search warrant and that Tekle should come out with his hands in the air. The other message asked him to answer the phone when negotiators called or to call or text the negotiators back.

At no point do the messages give any indication that negotiators had successfully made contact with Tekle Sundberg.

At one point, the officer on the loudspeaker said: “Tekle, we cannot hear you when you’re trying to communicate with us at the window. Please pick up the phone when the officers are calling and talk with them on the phone.”

About an hour and 10-minutes in, at 1:10 a.m, police broadcast a message asking Tekle to check his phone for a video message from his father. They repeated that message again 25 minutes later, indicating that they had received no response.

Then, after another 35 minutes passed, Mark Sundberg attempted to address his son directly over the loudspeaker.

There is no indication in the video that Tekle heard his father’s message or responded. Mark Sundberg tried again about five minutes later.

“Tekle, this is your dad again. I love you. I know you love me. Please talk to the negotiators,” he said, with his voice breaking at the end. “They really got to talk to you. Please do it, for me. Thanks,” he said.

The Minneapolis City Attorney’s Office is in the process of reviewing the body camera footage of the fatal encounter. It will be shown to the family first before it is released to the public.

This video is one of several live streams of the incident captured by users of the Citizen app, all of which are still publicly available in a playlist on their site that can be found here.

See the full version of this video with a time-stamped log below.

Video: 2-hour live stream of the standoff between Minneapolis police and Tekle Sundberg

This more than two-hour long video is from a live stream filmed by a user on the Citizen app of the standoff between Minneapolis police and Tekle Sundberg sometime before Sundberg was fatally shot by MPD snipers. The video has been publicly available on the Citizen app since it was taken and Fox 9 obtained permission to republish it.

0:01 At the beginning of the video, we can hear a police officer speaking over a microphone while Sundberg stands on the ledge of a window, gestures at officers, and says something in reply. The MPD officer asks Sundberg to step down from the window, go back inside the apartment and talk to officers over the phone. “Nobody wants anyone here to get hurt, including you. So I need you to hold back inside of the apartment from the window. Pick up the phone and talk to the officers on the phone,” he says.

It is difficult to make out exactly what Sundberg is saying in reply besides at one point when he repeats the word “no” several times.

He leans forward and crouches on the ledge. He spends roughly 29 seconds there before stepping back into the apartment.

2:28 The live streamer says he sees a police drone. “They’re throwing out a drone. That’s a done right there.”

3:29 MPD tells Sundberg that they are trying to call him and ask him to pick up the phone. “Tekle, this is the Minneapolis Police Department. We are attempting to make contact with you via the telephone. Please answer your phone when it rings and talk to the officers.”

4:46 The live streamer says he heard Sundberg tell officers that they had lied to him. “He was saying that they lied or something like that.”

4:54 MPD repeats their request for Sundberg to pick up his phone.

6:30 The MPD officer makes the first of what will be many announcements saying that police have a search warrant for Sundberg’s apartment.

“Andrew Sundberg, you are under arrest. Please come out of the apartment now with your hands in the air.”

10:08 The officer repeats, verbatim, the demand for Sundberg to come out of the apartment with his hands up.

12:27 The officer repeats the requests for Sundberg to pick up his phone. “Tekle, if you are able to pick up your phone, please do so. The officers are trying to call you, so they can have a conversation.”

14:13 The officer again asks Sundberg to pick up the phone.

14:59 The officer repeats the message saying they have a search warrant and demanding that Sundberg leave the apartment with his hands up,

18:24 Sundberg steps back out onto the ledge and appears to take several selfies as a police drone hovers nearby.

19:22 A man yells, in an emotional, despairing voice, “Jesus Christ, just answer the phone. We all just want to get along.” It’s unclear whether it is a bystander or an MPD officer.

19:33 The officer repeats the request for Sundberg to pick up the phone.

20:29 The officer announces a number for Sundberg to call to talk to negotiators as a drone hovers by the window.

21:23 A drone again approaches the apartment window. The live streamer says the window is closed.

22:39 The officer repeats the message about the search warrant.

26:48 The officer repeats the message about the search warrant.

32:09 Two officers are visible by the front entrance of the apartment building, with one leaning against a wall.

33:12 Sundberg opens the window as the officer repeats the message about police calling his phone. He momentarily disappears from view, but then moves the blinds to the side, and can be seen on the other side of the glass. He appears to be moving his arm, but the image is blurry. A short time late, he appears to slide the window shut again.

The officers remain by the entrance of the building from that point on.

35:53 “Tekle, answer your cell phone. The officers are trying to call you right now.”

39:29 The officer repeats the message about Sundberg being under arrest.

41:53 The officer repeats the search warrant / under arrest message.

47:27 The officer repeats the search warrant / under arrest message.

53:02 The officer repeats the search warrant / under arrest message.

59:20 The officer repeats the search warrant / under arrest message.

01:05 The officer repeats the search warrant / under arrest message.

01:15 The officer repeats what he said about the video message from Sundberg’s father.

01:20 The officer repeats the search warrant / under arrest message.

01:34 “Tekle, answer the phone so that officers can talk to you. They sent you a video message of your father. You can also call them directly back on the number that the text message came from.”

01:43 The officer asks Sundberg to call them again. There are now two officers leaning against the wall by the front entrance. They enter and exit the building several times. “They are just loitering around,” the live streamer says.

02:04 The officer says: “Tekle. I can see you at the window. Will you please answer the phone?”

A tree is blocking part of the live stream camera’s view of the side of the window where Tekle appears to be standing. He seems to have partially opened it.

The officer says: “Tekle, we cannot hear you when you’re trying to communicate with us at the window. Please pick up the phone when the officers are calling and talk with them on the phone.”

The live stream is not picking up any audio from Tekle.

02:13 Tekle Sundberg’s father, Mark Sundberg, can now be heard on the loudspeaker.

“Tekle, this is your dad again. I love you. I know you love me. Please talk to the negotiators? They really got to talk to you. Please do it, for me. Thanks.”

02:19 The MPD officer repeats the search warrant / under arrest message.

02:22 There are now a group of officers by the entrance of the building. One appears to be holding some kind of ballistic shield. The live streamer says he counts six in the group.

02:31 The live streamer ends the broadcast.