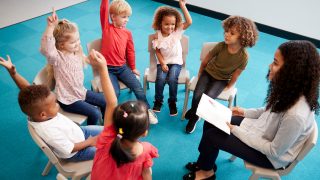 (Worthy News) – The Christian parents of a second-grade girl in Des Moines, Washington have threatened legal action against North Hill Elementary School after being told their daughter may not share her faith with classmates, and after staff members searched her backpack to make sure she was not carrying religious pamphlets into the school, CBN News reports.

North Hill claims the girl was not banned from sharing her faith but was asked to invite her classmates to hear about her faith, to respect their wishes if they did not want to, and not to frighten them with accounts of Satan and hell, CBN said. Represented by the American Center for Law and Justice (ACLJ), the girl’s parents allege the school has violated their child’s First Amendment religious rights, and have sent a letter of Demand ordering the school to take immediate corrective action or face a lawsuit.

According to CBN, the girl had previously been sent to the principal’s office and reprimanded by school staff for talking about the Gospel in the school playground. The last straw came when her mother dropped her off at school one day and saw a staff member going through her daughter’s bag, checking for Christian materials that they said she had been handing out to other children.

In a statement to CBN, the Highline Public Schools Chief Communications Officer Catherine Carbone Rogers said: “As reflected in its policies and procedures, the Highline Public Schools agrees with the core principles raised in the ACLJ letter of governmental neutrality to religion, avoidance of discrimination against religious viewpoints, and allowing students to express themselves at school, including potentially through the distribution of written materials. At the same time, we must sometimes restrict student expression to avoid undue interference or disturbance—especially at the elementary school level.”

Rogers added that “Several students reported being scared by her talk of Satan and Hell, and multiple parents complained about their children coming home with religious pamphlets.”

However, ACLJ said in a statement about the case: “It is abundantly clear that school officials must be able to affirmatively establish that they have a substantial reason to interfere with a student’s First Amendment rights, and stating ‘because it is upsetting parents’ as the reason certainly does not meet this constitutional threshold. The actions of the school officials were particularly egregious in this case because they not only violated this student’s rights but also publicly humiliated her. They will not get away with this.” The school has been sent a letter of Demand that must be responded to by March 14, CBN said.