The big day has finally arrived.

Watch the hearing below starting at noon ET. 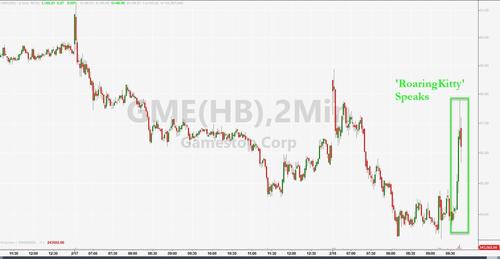 As we detailed earlier, several of the main players in the “Meme stock” trading frenzy saga – which infamously led to Robinhood and other digital brokerages halting orders related to certain securities, most notably GameStop, as prices soared – will sit for testimony before the House Financial Services Committee, led by Chairwoman Maxine Waters, where they will be asked to explain exactly what happened, and why Robinhood, Citadel and others did what they did.

As a reminder, here’s the full list of guests who will testify (with Dave Portnoy notably absent).

The witness list for the virtual hearing is as follows:

We look forward to watching Chairwoman Waters and some of the leftist firebrands on the committee (including AOC, one of the first to call for a hearing into the trading fiasco) ‘grandstanding’ into all the witnesses, particularly the one megabillionaire (Griffin) among the group, as they grapple with the arcane topic of market microstructure while attempting to smear everyone as a bad actor (especially the Russians – who Reddit CEO said were absolutely not involved).

For those who have the privacy and the time, gamestop hearing-themed drinking games are already pouring forth from fintwit.

What else are we missing?

Along with hearing buzzword bingo. 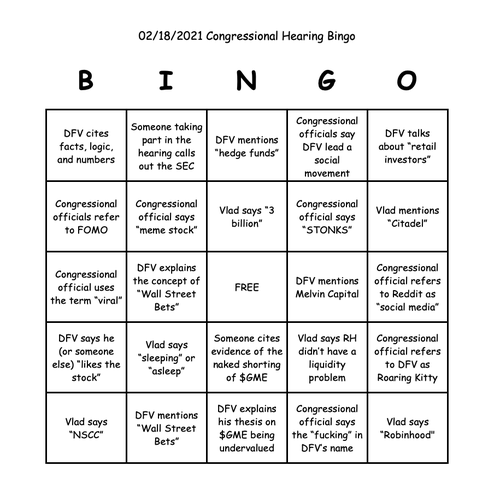 While Bloomberg TV has produced a viral moment of its own with this handy guide to Internetspeak. 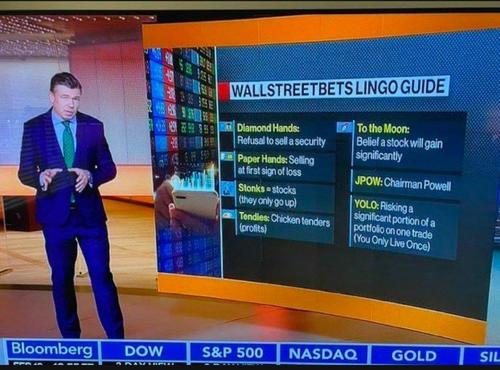 Along with this handy Internet slang language guide, though mass media has already introduced Americans to the terms “stonks”.

As we all wait for what’s expected to be a combative Q&A, Dave Portnoy, a leading critic of Robinhood’s actions during the late-January trading frenzy, is promising to “lead a revolution in the streets much like the Tom Brady revolution”.

“RoaringKitty can’t use his brain to make a profit? Get out of here,” with Portnoy adding that RoaringKitty aka Keith Gill is “a great American”. “

In his remarks, Griffin, arguably the most important player to take the stand on Thursday, said that while Citadel is the biggest market maker and filler of retail trades in the US, the HFT market maker/hedge fund chief said he “wanted to be perfectly clear…we had no role in Robinhood’s decision to limit trading in GameStop or any other of the ‘meme’ stocks. I first learned of Robinhood’s trading restrictions only after they were publicly announced.”

Not only did Citadel have nothing to do with Robinhood’s decision, but on Wednesday and Thursday Jan. 27 & 28, the height of the trading surge, when digital brokers started cutting off order flow, Citadel apparently filled more retail trades “than the average daily volume of the entire U.S. equities market in 2019.”

“During the period of frenzied retail equities trading, Citadel Securities was the only major market maker to provide continuous liquidity every minute of every trading day. When others were unable or unwilling to handle the heavy volumes, Citadel Securities stepped up. On Wednesday, January 27, we executed 7.4 billion shares on behalf of retail investors. To put this into perspective, on that day Citadel Securities executed more shares for retail investors than the average daily volume of the entire U.S. equities market in 2019. The magnitude of the orders routed to Citadel Securities reflects the confidence of the retail brokerage community in our firm’s ability to deliver in all market conditions and underscores the critical importance of our resilient systems.”

Read the rest of Griffin’s testimony below:

Reddit CEO Steve Huffman, meanwhile, insisted in his testimony that WallStreetBets is “a real community” that just happened to experience a “traffic onslaught” during the run-up to the late January trading frenzy. Since Reddit has a “responsibility” to its communities to support them during times of attention-related stress, and so the company used its resources “working around the clock” to keep WSB online.

As for the “self-deprecating jokes” and “crass language” seen on the forum, well, that’s just part of what makes it a community.

“I will stress that WallStreetBets is first and foremost a real community. The self-deprecating jokes, the memes, the crass-at-times language, all reflect this. And if you spend time on WallStreetBets, you’ll find a significant depth to this community, exhibited by the affection its members show one another. They are just as quick to support a fellow member after a big loss as they are to celebrate after a big gain. A few weeks ago, we saw the power of community in general and of this community in particular when the traders of WallStreetBets banded together at first to seize an investment opportunity not usually accessible to retail investors, but later more broadly to defend all retail investors against the criticism of the financial establishment.”

Additionally, Huffman confirmed that it wasn’t “The Russians” or “The Chinese” or some other malevolent ‘bad actors’…which we are sure will break a few narratives today.

Read the rest of his testimony below:

To rehash what we published yesterday, in his prepared testimony, Keith Gill, a Youtuber/Redditor best known as “RoaringKitty” and “DeepF*ckingValue” , who is facing a lawsuit related to his trading and online antics, insists that he still believes in his “fundamental case” for being long Gamestop, and insists he didn’t try and pump the shares purely for his own profit.

In his testimony, Gill recounts how his family had an “incredibly difficult” 2020 after losing his sister to COVID.

“I did not solicit anyone to buy or sell the stock for my own profit. I did not belong to any groups trying to create movements in the stock price. I never had a financial relationship with any hedge fund. I had no information about GameStop except what was public. I did not know any  people inside the company, and I never spoke to any insider. As an individual investor, I use publicly available information to study the market and the value of specific companies.”

He added that sharing the news with his family about his newfound financial success – that “we were now millionaires” – gave him tremendous joy.

In remarks from Melvin Capital chief Gabriel Plotkin,the hedge funder insists his firm learned a painful lesson from its GameStop short position, though he insisted it wasn’t “bailed out”.

He starts by noting that his firm had nothing to do with Robinhood’s decision to pause trading in Gamestop, and that “it is very important to understand that absolutely none of Melvin’s short positions are part of any effort to artificially depress or manipulate downward the price of a stock.”

“When our research suggests a company will not live up to expectations and its stock price is over-valued, we might “short” a stock  . Like with our long positions, our practice is to short a stock for the long term after extensive research. We also short stocks because when the markets go down, we have a duty to protect our investors’ capital. There are laws governing shorting stock, and of course we always follow them. In addition, it is very important to understand that absolutely none of Melvin’s short positions are part of any effort to artificially depress or manipulate downward the price of a stock. And nothing about our short position prevents a company from achieving its objectives.”

Read the rest of his full remarks below:

Finally, Robinhead co-founder and CEO Vlad Tenev claims that the events of that day, when the price of Gamestop shares soared above $300, were extraordinary, and that the firm did what it did to its clients – cutting off orders in certain “meme stocks” due to – as he has insisted many times before – clearing-related requirements.

“Robinhood has changed the investing world for the better”, Tenev insists, adding that his firm didn’t favor hedge funds.

“What we experienced last month was extraordinary, and the trading limits we put in place on GameStop and other stocks were necessary to allow us to continue to meet the clearinghouse deposit requirements that we pay to support customer trading on our platform. We have since taken steps to raise $3.4 billion in additional capital to allow our customers to resume normal trading across Robinhood’s platform, including trading in the stocks we restricted on January 28. We look forward to continuing to serve our customers”

Read his remarks below:

Previous post: [ Record-Breaking Temperatures Strip Texans Of Heat And Water: ‘We Were Not Prepared For This’ ]
Next post: [ The Reform Party Roots Of The New GOP Are Its Future ]