We cannot worship without words. 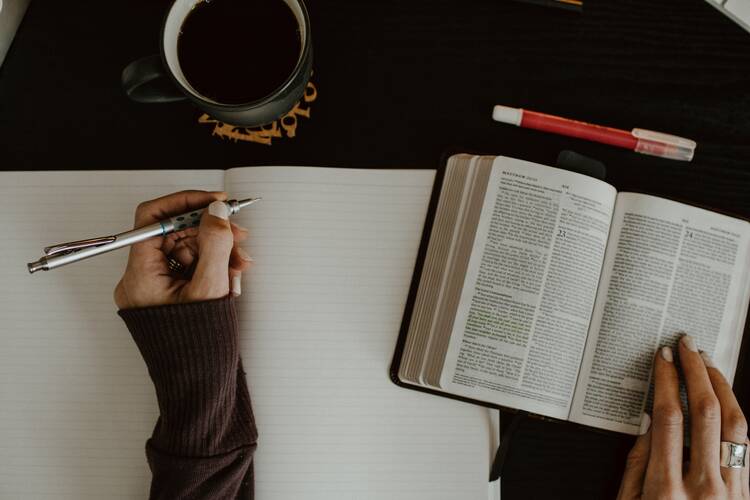 A Reflection for the Sixth Sunday of Easter

“Where Are They Now?” was a 1968 BBC radio play, written by Tom Stoppard. Its setting is a reunion banquet of an English boys’ school. Over drinks, the old men give the play its title, discussing who is missing and who died in which war. The gathered alumni were once boarding boys, so the meal begins with a familiar invocation to stand, “Gentlemen, let us say grace.”

For what we have received, may the Lord make us truly thankful. Amen.

Grunting back into his seat, one of the old men muses:

Just thinking, for ten years of my life, three times a day, I thanked the Lord for what I was about to receive and thanked him again for what I had received, and then we lost touch. And I suddenly thought, where is he now?

He cannot help but to chuckle at his own joke. As a boy, he had no choice. With daily chapel and grace before and after meals, he and God had been quite close, residents of the same English boarding school. But in the years that followed, he had lost touch with the Lord, as one might drift away from a classmate. Where is the old boy, God, now?

As much as we are creatures of flesh and bone, we are also men and women of words. We live in the world both physically and mentally.

But his joke is truer than he knows. For as much as we are creatures of flesh and bone, we are also men and women of words. We live in the world both physically and mentally. The physical we owe to our muscles; the mental, to our words. Indeed, once free from our mother’s arms, most of our connections with others are forged by way of words.

God, of course, is pure spirit. Before the Incarnation, we never saw or touched God, but because we are creatures of flesh and blood, critters with words, that is who God became for us, an interlocutor. And here is the crux of the matter: That is who God remains for us.

Jesus said to his disciples:
“Whoever loves me will keep my word,
and my Father will love him,
and we will come to him and make our dwelling with him.
Whoever does not love me does not keep my words;
yet the word you hear is not mine
but that of the Father who sent me (Jn 14:23-24).

The great mistake that many make in what they call their spiritual lives is to believe that they do not need words to be in communion with God. They wander in the woods; they look in the face of a newborn baby; and they are grateful. All good enough for what it is, and it is a lot.

The great mistake that many make in what they call their spiritual lives is to believe that they do not need words to be in communion with God.

Yet we can only share what those woods or this child means to us—and even then, we will grapple and grind—by way of the words we share with others. It is something to feel sorry for what you have done; it is everything to say that you are sorry. We are wielders of words. That is how we live in communion with each other, and we have no other way to dwell with him whom we call the Word made flesh other than the words we repeatedly read and recite.

The church’s ancient eucharistic prayer refers to itself not as a bloody offering but as “a sacrifice of praise.” And what is that? Words!

When the disciples asked the Lord to teach them to pray, he said nothing of closing their eyes to block out the world or of opening them wide to ponder its wonders, though undoubtedly he sometimes prayed so himself. No, in response to their request, he gave them words. Just words. “Our Father, who art in heaven…”

The church speaks of two liturgies: the Liturgy of the Eucharist and the Liturgy of the Hours. The latter is simply regularly repeated words: chanted psalms, canticles and readings from sacred Scripture. And for those who pray the hours privately, I urge them to pray aloud. They take on a much greater intentionality, and saying the words aloud makes them more revelatory.

Worship is all about the words we say when we gather in common.

Even the liturgy we call the Eucharist cannot exist without words. It is the word that summons us, and the word that makes the bread and wine to be the body and blood of Christ. Without spoken words, nothing would happen in the Eucharist.

St. John the Seer tells us:

I saw no temple in the city
for its temple is the Lord God almighty and the Lamb.
The city had no need of sun or moon to shine on it,
for the glory of God gave it light,
and its lamp was the Lamb (Rev 21:22-23).

True enough. There are no sacred sacrifices in heaven. There, the holy has long since consumed the profane. And there is no gathering to break bread or to break open the word, because that which now nourishes us only partially and sporadically will then be plentiful and permanent.

In the meantime, worship is all about the words we say when we gather in common.

Just thinking, for ten years of my life, three times a day, I thanked the Lord for what I was about to receive and thanked him again for what I had received and then we lost touch. And I suddenly thought, where is he now?

We are wielders of words. We do not just employ them. They make us who we are. We are what we say and what we fail to say. That is true whether we speak with each other or with the Lord.