We live in the age of anti-heroes. But few can top John Kennedy Toole’s Ignatius J. Reilly. 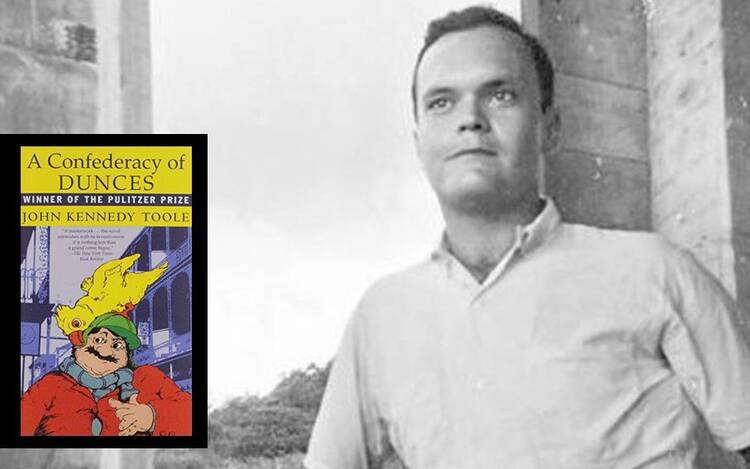 The rise of “prestige television” over the last several decades has been paralleled by a rise in our acceptance in popular culture of the antihero: a protagonist who is compelling and engrossing as a character but deeply flawed (or openly villainous) in a way that puts him or her beyond the pale of society. Tony Soprano and Walter White are the two classic examples, but Don Draper fits the mold as well, and Sarah Vincent noted in America that recent TV shows like “Killing Eve” center on characters—​​Eve and Villanelle—whose moral compass has no true north.

It’s not all new, of course. We’ve always loved our gangsters and our cowboy rustlers, and much of the tension of American fiction is found in the question of whether an appealing character will “break bad.” But it seems more prevalent these days. One author who presaged this era was John Kennedy Toole, whose posthumous 1980 novel A Confederacy of Dunces introduced us to one of the funniest and most outrageous antiheroes of any era: Ignatius J. Reilly.

“The grandeur of my physique, the complexity of my worldview, the decency and taste implicit in my carriage, the grace with which I function in the mire of today’s world…”

A lonely, oversized and unemployed misanthrope who lives with his mother Irene but imagines himself a wise and misunderstood sage, Ignatius J. Reilly is one of many technicolor characters in Toole’s novel, including the city of New Orleans itself (which now has a statue of Ignatius on Canal Street). Through his self-valorizing diary entries as well as his letters to an equally antisocial love interest, Myrna Minkoff, Ignatius offers social commentary and outrageous fantasies about his role as a modern-day Boethius who will restore the chaotic world in which he lives to harmony—especially if it means he doesn’t have to work very hard or moderate his own huge appetites.

Ignatius shouldn’t arouse our sympathies: He is cruel to his mother, rude to almost everyone he meets and comically lacking in self-reflection or humility. And yet he has charmed four decades of readers since the novel’s publication in 1980. It was our Catholic Book Club selection for Spring 2020, and C.B.C. moderator Kevin Spinale, S.J., was straightforward in his endorsement: “I think that we need this novel now more than ever.”

Why? Spinale admits there’s much about the book and its protagonist to dislike. The book is such an equal-opportunity offender in terms of racial and sexual stereotypes that probably only Martin Amis could get away with it today, and indeed there is much of John Self from Money in the protagonist. “[B]oth Ignatius J. Reilly and John Kennedy Toole, Ignatius’ creator, are utterly beyond the pale,” Spinale writes. “Utterly. Not only is some of the language and many of the characters of the novel unacceptable and offensive, but the book’s main character resides so absurdly beyond the pale that he aligns himself passionately with the ‘geometry and theology’ of the medieval period.”

At the same time, he argues, “I think we also need comedy—actual laugh-out-loud, wonderfully thoughtful, uniquely creative comedy. Comedy that helps us be more human, less afraid and less serious about ourselves. Now, we need Ignatius Jacques Reilly and this warmly funny novel to help keep us reflective and hopeful.”

A Confederacy of Dunces won the Pulitzer Prize for Fiction in 1981, a stunning turnabout for a novel whose publication itself was a bit of a miracle.

Spinale identifies a moment when Ignatius finds brief employment running a hot dog cart as emblematic of both the humor and the absurdity of Dunces. Here is Ignatius’ diary entry for the time:

At first I thought I might have found a surrogate father in the czar of sausage, the mogul of meat. But his resentment and jealousy of me are increasing daily; no doubt, they will ultimately overwhelm him and destroy his mind. The grandeur of my physique, the complexity of my worldview, the decency and taste implicit in my carriage, the grace with which I function in the mire of today’s world—all of these at once confuse and astound Clyde. Now he has relegated me to working in the French Quarter, an area which houses every vice that man has ever conceived in his wildest aberrations, including, I would imagine, several modern variants made possible through the wonders of modern science.

Hard not to laugh—but also hard not to think My God this is what Donald Trump would be like if he were poor and Catholic. The narcissism, the megalomania, the unwarranted self-regard: It doesn’t just occur in fiction. We laugh at and with Ignatius, but we also recognize that even the most comic of antiheroes has real-life parallels.

A Confederacy of Dunces won the Pulitzer Prize for Fiction in 1981, a stunning turnabout for a novel whose publication itself was a bit of a miracle. Its author, John Kennedy Toole, struggled to complete his doctorate in literature or hold steady work; he had shopped the initial manuscript of Dunces to a commercial publisher before despairing of it ever seeing publication. Suffering from depression, he committed suicide in 1969 at the age of 31. According to his mother, her son’s depression was caused partly by his inability to find a home for the book. She took it upon herself to find a publisher and spent the next decade trying.

She finally gave the manuscript to Walker Percy, who was teaching at Loyola New Orleans. As related in an editorial note by America’s editors in 1981, Percy was not impressed at first, but then began reading—and couldn’t put it down. After a few years, he found an academic press—Louisiana State University Press—to publish the book. A year later, it had sold 45,000 copies and won the Pulitzer. “The story is a tribute to mother love, to Mr. Percy and to small presses, if not to the insight and daring of commercial publishers,” wrote America’s editors. “The Pulitzer Prize will not help the author. No one will ever know whether he was a one book author or a great, stifled talent. The story has no moral, only a great joy for Mrs. Toole, and a great sadness.”

Why isn’t there a movie version of A Confederacy of Dunces? There is a legend the project is cursed (among the actors proposed for the role of Ignatius are three who died prematurely: John Belushi, John Candy and Chris Farley). But more likely every attempt to bring it to the silver screen has foundered because the novel is simply unfilmable. It is neither farce nor satire, and its humor comes from Ignatius’ pen as much as from his bumbling exploits around New Orleans. No actor alive or dead—sorry, not even Nick Offerman—could possibly capture Ignatius’ personality. To quote John Waters when his own attempt failed: “How can a movie ever live up to that book?”

We laugh at and with Ignatius Reilly, but we also recognize that even the most comic of antiheroes has real-life parallels.

Our poetry selection for this week is “The fall,” by Chiwenite Onyekwelu. Readers can view all of America’s published poems here.

In this space every week, America features reviews of and literary commentary on one particular writer or group of writers (both new and old; our archives span more than a century), as well as poetry and other offerings from America Media. We hope this will give us a chance to provide you more in-depth coverage of our literary offerings. It also allows us to alert digital subscribers to some of our online content that doesn’t make it into our newsletters.

Theophilus Lewis brought the Harlem Renaissance to the pages of America

Lessons from John Courtney Murray for our divided country

Joan Didion: A chronicler of modern life’s horrors and consolations