What does Our Lady of Fátima have to do with Russia and Ukraine? 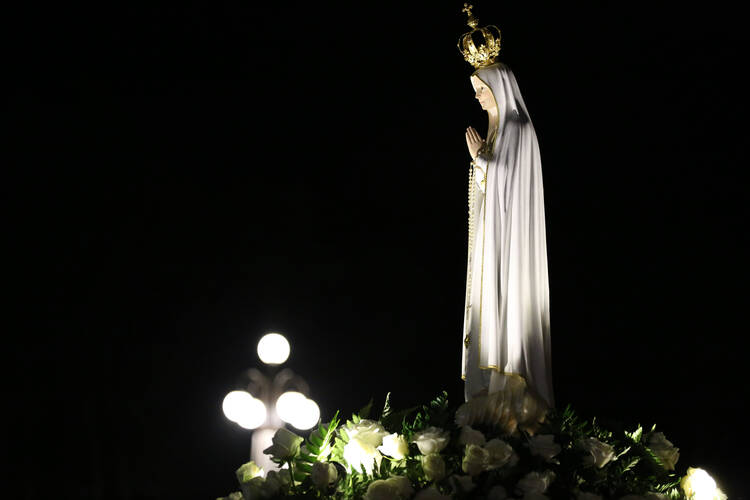 It turns out moving your thumb along a decade of rosary beads feels a lot like scrolling through a news feed. I have discovered this as I reach more and more for my rosary these days, amid the flood of horrific images and stories of Russia’s onslaught in Ukraine—most recently, the bombing of a maternity hospital in Mariupol.

Each day’s news brings fresh feelings of incredulity, anger and helplessness that gnaw at me long after I set down my phone and tend to my two young sons. I have found that praying the rosary gives somewhere for my anxiety to spill over. Even if I can’t focus on the mysteries, the act of running my thumb and forefinger from one cool, jade bead to another channels my ruminations. The repetitive prayers have sometimes felt like mindless chatter—but amid current events, the simplicity and predictability of the rosary is soothing.

I have also been reminded these days of the rosary’s connection to Russia. On March 15, the Vatican announced that Pope Francis, heeding a request from the Catholic bishops of Ukraine, will consecrate Russia and Ukraine to the Immaculate Heart of Mary during a penance service on Friday, March 25. Cardinal Konrad Krajewski, the papal almoner, will carry out the same act in Fátima on the same day.

On March 15, the Vatican announced that Pope Francis will consecrate Russia and Ukraine to the Immaculate Heart of Mary during a penance service.

This will be but one moment in a centuries-long history of association between the rosary and prayer for the conversion of Russia.

In some ways, devotion to the rosary and the Immaculate Heart feels like part of a bygone era—something from the childhood memories of my grandparents. But the Ukrainian bishops’ message suggests to me that it is a good time to return to the story of Fátima and to think about how Mary’s message might lead us back to the rosary today, to pray for peace and the conversion of Russia, and to cope with the magnitude of human suffering that constantly invades our news and social media feeds.

What is the story of Our Lady of Fátima?

Our Lady of Fátima is one of several 20th-century Marian apparitions the Vatican has deemed authentic. In 1917, Mary made six appearances to child shepherds in Fátima, Portugal, which inspired a global surge in devotion to Our Lady of the Rosary. Mary asked 9-year-old Lucia dos Santos and her cousins Francisco and Jacinta Marto, ages 8 and 6, to pray the rosary daily for world peace and the end of World War I.

[Read next: I went to a Ukrainian Catholic Church to pray a rosary for peace. I didn’t expect to find Muslims there in solidarity.]

On Oct. 13, 1917, the occasion of Mary’s sixth appearance in Fátima, the children and tens of thousands of people gathered with them witnessed a miraculous transformation of the sun, an event sometimes referred to as “the day the sun danced.” Francisco and Jacinta died several years later because of the 1918–19 influenza pandemic. Lucia lived as a religious sister until the age of 97 and received further visions—among these was a specific request to pray for Russia’s conversion.

What does Fátima have to do with Russia?

Asking Mary’s intercession for the conversion of Russia has been a recurrent priority of the church in the last 100 years. At Fátima, Mary asked that Russia be consecrated to her Immaculate Heart. In 1929, she renewed her request in an appearance to Lucia, who was then preparing for life as a religious sister.

On Oct. 13, 1942, in the thick of the Second World War, Pope Pius XII consecrated the world to the Immaculate Heart of Mary. Ten years later, during the Cold War, he specifically consecrated the Russian people to her Immaculate Heart, in the hopes Mary would intercede in bringing about “a true peace, fraternal concord, and the freedom due to all people.” Pope Paul VI renewed this consecration during the Second Vatican Council.

Why was the message of Fátima especially concerned with the conversion of Russia, and why has the church taken this so seriously?

Pope John Paul II and Pope Francis have made similar pronouncements. On the 96th anniversary of the apparition at Fátima, in 2013, Francis concluded his homily marking the anniversary of the miracle at Fátima with an act of entrustment to Our Lady of Fátima. Earlier that year, two months after he was elected pope, Pope Francis requested the patriarch of Lisbon consecrate his entire pontificate to Our Lady of Fátima.

But why was the message of Fátima especially concerned with the conversion of Russia, and why has the church taken this so seriously? One factor is the rise of the Communist Party in Russia, and in particular, Joseph Stalin’s brutal reign, during which millions were imprisoned or executed. Another is the Cold War and the nuclear arms race, the reverberations of which are felt in the tensions today between Vladimir Putin and the West. Finally, the denial of God—an integral part of communist philosophy—deprived people of access to the transcendent, suppressed the freedom to worship and undermined the Christian vision of human dignity.

One might rightly object that far more countries than Russia needed our prayers in the 20th century. And yet at Fátima, Mary asked the world to pray the rosary explicitly for this cause.

What is Mary’s “Immaculate Heart”?

In a homily at Fátima in 1982, John Paul II remarked that consecration to Mary’s Immaculate Heart means drawing near to Christ and accepting the help of Mary “by having recourse to her motherly heart, which beneath the cross was opened to love for every human being, for the whole world.”

The classic image of the Immaculate Heart of Mary is a heart encircled by white roses, crowned with a flame, and pierced by a sword, which is an allusion to Simeon’s message to Mary (Lk 2:35). Hers is a heart aflame with love for the Lord, the heart of a mother, the heart to which Christ entrusted the whole world when he spoke to the apostle John from the cross, “Son, behold your mother” (Jn 19:27).

Why am I compelled to pray the rosary for the people of Ukraine and, bewilderingly, also for the Russian aggressors?

Most poignantly, Mary’s deep love is joined with profound sorrow, since she witnessed the suffering and death of her only son. The Immaculate Heart teaches us that true love is not indifferent; rather, love makes us capable of true sorrow, of suffering when others suffer. And in the rosary—especially in the Sorrowful Mysteries—we pray alongside Mary’s incredulity, anger and helplessness as she witnessed the passion of her son. The story of Fátima speaks to our times then because we can take the present horrors in Ukraine, and the suffering we have witnessed in the world over the past century, and place them in Mary’s hands at the foot of Christ’s cross, where all suffering is transformed by Christ’s work of redemption.

Why would Mary ask three Portuguese children to deliver to the world a message about Russia? Why am I compelled to pray the rosary for the people of Ukraine and, bewilderingly, also for the Russian aggressors? This is, I suppose, where fear and helplessness meet the mystery of prayer.

I pick up my son John from preschool and smile as I greet him, trying to put the day’s news out of my mind. I ask him about his day. They had dance class, he reports. Somehow his simple chatter makes my heart break—this image of John marching and leaping now lives in my head alongside images of the Perebeinis family lying on a road in Kyiv. What kind of world will my son know?

At home, we are greeted by a messy kitchen and a fussy baby. I ask John if he’d like to play with his sensory bin—a plastic tub full of dried chickpeas where he loves driving his dump trucks. It’s a great way for him to release stress from the day, and it will keep him busy for at least a half an hour. As I head to the kitchen sink to wash the dishes, I turn and see John, already immersed in play. He is picking up handfuls of the chickpeas and letting them slide slowly through his fingers, watching closely as they fall back into the bin one by one. They remind me of the rosary beads that I hold—as I pour out my anxieties and place my trust in Mary’s intercession.