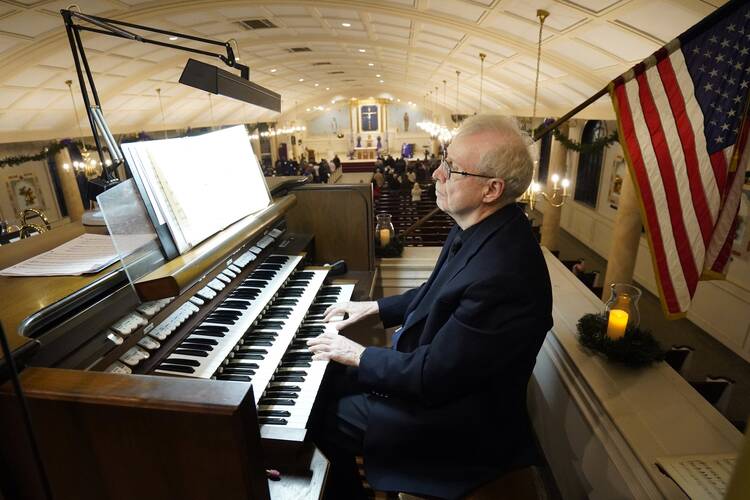 Liturgical music seems to go in a different direction every decade or so. After the Second Vatican Council, the acoustic guitar came into favor. A generation later, the flowery “Kumbaya” aesthetic of ’70s-era hymns no longer felt fresh, so drum sets and rock beats arrived in the pews. And in recent years, a movement has emerged among younger Catholics for whom the older traditions of the church are a rich discovery; they advocate getting back to Beethoven or simple plainchant.

At the heart of the debate over which music is best for Mass is a lack of shared criteria for judging music possibilities.

At the heart of the debate over which music is best for Mass is a lack of shared criteria for judging music possibilities. We flounder when we try to express why, exactly, a soulful song from Matt Maher on guitar is better or worse than, say, “Holy God, We Praise Thy Name.” But the church’s tradition of thinkers and theologians has practical advice. I suggest St. Thomas Aquinas’s three components of beauty as a tool to help music directors sift through their options.

St. Aquinas suggests in the Summa Theologica that anything considered beautiful must have three distinct qualities. The first is integritas, or integrity—meaning a thing has the wholeness of what it is supposed to be. A mountain cannot be beautiful without hardness and stability. A dog whose skin is covered with flower petals instead of fur might arguably be prettier than your average Doberman, but it is not fully a dog and thus cannot be a beautiful dog. Integritas ensures that a thing really is what it claims to be.

The second quality of beauty is consonantia, often translated as harmony, proportionality or composition. Do the various parts of a thing all work together? Is there just the right amount of each one? Imagine your favorite painting—then imagine shrinking it into one corner of the canvas and covering the rest with a photograph by Ansel Adams. All the pieces of this new creation are great, considered individually, but they do not work together. The composition as a whole is off—it lacks consonantia.

The third component of beauty described by St. Aquinas is claritas, meaning clarity, radiance or intelligibility. Perhaps this is summed up by the term self-communicativeness: A beautiful cathedral must actively reveal everything from the idea that it is a space for encounter with Christ and re-orientation toward heaven to the fact that it wants people to come in. A cathedral with a locked door is short on claritas, as is a poem written in script too small to read.

First off, there is no need to do away with any particular instrument or even any genre of music. We do not need to banish the guitar or dispense with all old-school chant.

Can integritas, consonantia and claritas be helpful in evaluating liturgical music? Surely we want our music at Mass to be beautiful, so let us examine what guidelines they can provide.

First off, there is no need to do away with any particular instrument or even any genre of music. We do not need to banish the guitar or dispense with all old-school chant. The Renaissance composer Palestrina created beautiful music, but so has the contemporary singer Audrey Assad. Rather than focusing on instrumentation or time period, we should ask that liturgical music serve its liturgical purpose, that the composition and performance of the music work together harmoniously toward that purpose, and that it be intelligible and singable for the congregation.

Let us consider some examples that miss the mark. Any hymn that is difficult for the congregation to learn or sing has a problem with claritas, which can be an issue with newer worship songs that use syncopation like “I Will Choose Christ” or Curtis Stephan’s “Miracle of Grace.” Sure, you can sing along with those songs on the radio, but it is awfully difficult to read the music in a missal if you don’t already know how it goes.

Any hymn that is difficult for the congregation to learn or sing has a problem with claritas.

What about integritas? Here we need to consider what the music in Mass is for. What end is it serving? The General Instruction of the Roman Missal says, for example, that the entrance chant should aim “to open the celebration, foster the unity of those who have been gathered, introduce their thoughts to the mystery of the liturgical time or festivity, and accompany the procession of the Priest and ministers.” If a song contains lyrics that are overly secular or vaguely heretical, that could disrupt the unity of the Christian faithful or fail to lead their thoughts toward the sacramental mysteries. Alas, one example is “All Are Welcome,” which the U.S. Conference of Catholic Bishops has called unacceptable because its “image of the Eucharist is of an ordinary banquet where one drinks water and wine and eats wheat bread.”

Consonantia is the most frequent challenge. In my diocese, there are many beautiful old churches outfitted with traditional organs, and there are few churches with musicians who play guitar. Returning to Matt Maher, I often hear his heartfelt, beautiful song “Your Grace is Enough” played stodgily on an organ, with heavy, choppy chords attempting to approximate his lively guitar. Bach sounds marvelous on an organ—full, moving, powerful. But play a guitar song on it and the elements simply do not work together.

[Related: The Greatest Hymns of All Time (as chosen by America readers)]

So if your parish has a marble altarpiece, rose windows and an organ, lean into the church’s heritage and bring new life to traditional works. Conversely, if your church has a more modern ambiance and a band with guitar and drums, you have the option of playing lots of new music as well as modern arrangements of the old classics—but you may want to put the drumsticks aside while performing more traditional chants.

Aquinas’s three criteria for beauty are direct yet flexible, and there are many ways music directors can use them to create the right atmosphere for Mass. A typical piano-led choir singing “One Bread, One Body,” an organ-backed cantor wearing formal vestments and leading “At the Cross Her Station Keeping” during the Stations of the Cross, or a youth group featuring a full band and playing Audrey Assad’s arrangement of “Holy, Holy, Holy” or “Fortunate Fall”—all of these meet the criteria of integritas, consonantia and claritas, and so make music a truly beautiful part of the liturgy.

Disagreements over liturgical music will inevitably continue, but music directors are less likely to go astray if they take Aquinas into account. Music without beauty, like St. Paul without love, is only a resounding gong.