‘When Irish Eyes Are Smiling’: The history behind the song 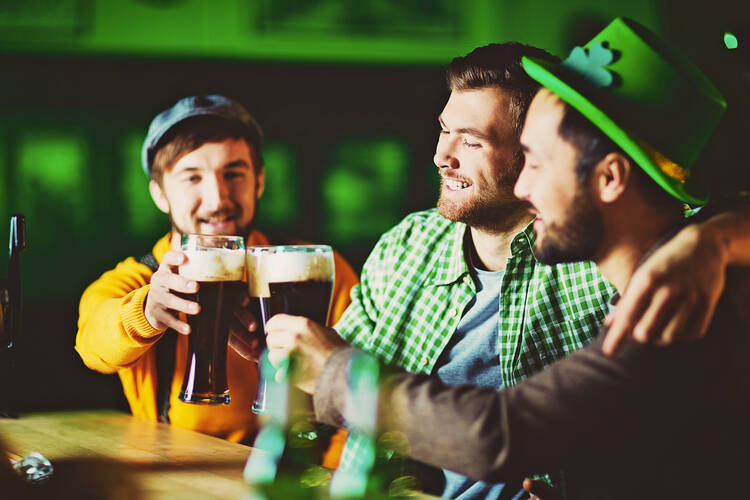 There is one song you will probably hear today in St. Patrick’s Day celebrations all over the country and across the world, from the humble village pub to the most elaborate hotel soiree. It is the most well-known and ubiquitous Irish song ever, sung ad infinitum (or ad nauseam, take your pick): “When Irish Eyes Are Smiling.”

Just about everybody has sung it, even if you always hear Bing Crosby when you think of it. Crosby’s rendition of the Irish-American musical staple was recorded in a slower tempo—almost as a prayer—than is usually done; today you’re more likely to hear it louder and faster from would-be barstool impresarios.

A song like “When Irish Eyes Are Smiling” can rouse the emotions: It can make you smile, make you think, make you laugh (a certifiable Irish specialty) or make you cry.

The song has come to be regarded as an unofficial anthem of the Irish diaspora, so much so that even politicians, Irish or not, have appropriated it in an attempt to ingratiate themselves to their audiences when St. Patrick’s Day comes around. When the Kennedy family sang it, they were notoriously off-key. During his 1964 tour of Poland, just months after President Kennedy’s assassination, his brother, Robert, got atop the roof of a car and, with microphone in hand, sang the famous song but with a twist: He substituted “Polish eyes,” to the amusement of his Warsaw audience. They loved him anyway.

President Ronald Reagan, concluding a summit meeting with Canadian Prime Minister Brian Mulroney in the 1980s, locked arms with his counterpart and, with more gusto than tune, the two presented the world with their version of the Celtic classic. The most famous rendition of all came when the Speaker of the House of Representatives, Thomas P. (Tip) O’Neill, belted the song’s refrain atop the Great Wall of China, likely making it the likely first rendition of the song to be sung in the Middle Kingdom.

A song like “When Irish Eyes Are Smiling” can rouse the emotions: It can make you smile, make you think, make you laugh (a certifiable Irish specialty) or make you cry. (And, depending on the circumstances, it can make you angry—an Irish category all its own.) It was not for nothing that the English Catholic apologist G. K. Chesterton, in an astute observation about the character of the Irish, said of them: “All their wars are merry, and all their songs are sad.”

Despite Ireland’s long history of song, “Irish Eyes” is a relative newcomer to the musical scene: It is just over 100 years old. Written in 1912 as a show tune by Chauncey Olcott and George Graff Jr., it was set to music by Ernest Ball for Olcott’s production of “The Isle of Dreams.” It was a romanticized song for a romanticized Ireland, which in a few years would be plunged into a war for independence followed by a tragic civil war. But before then—and just before the start of World War I—the song became wildly popular on both sides of the Atlantic, especially after John McCormack, the Irish-American tenor, sang it.

Despite Ireland’s long history of song, “Irish Eyes” is a relative newcomer to the musical scene: It is just over 100 years old.

Everybody knows the chorus:

When Irish eyes are smiling,
Sure it’s like a morn in Spring;
In the lilt of Irish laughter
You can hear the angels sing…

But that is not the entire song: It has two verses framing the chorus, both as timely and meaningful as when they were first written. The second verse is less known but can bring a tear to the eye of anyone, Irish or not:

For your smile is a part of the love in your heart,
And it makes even sunshine more bright;
Like the linnet’s sweet song, crooning all the day long,
Comes your laughter so tender and light;

For the spring-time of life is the sweetest of all,
There is ne’er a real care or regret;
And while spring-time is ours throughout all of youth’s hours,
Let us smile each chance we get.

There will be a proper St. Patrick’s Day celebration this year after two years of Covid-19 restrictions. Masses will be offered, and prayers will be said for that “green and misty island.” Parades will resume, gatherings amongst families and friends will begin where they left off. Food and drink will be plentiful, and, of course, the music will grace the air.

While St. Patrick’s Day this year will obviously be a joyous occasion for the Irish people and their descendants all over the world, it will be tinged with sadness and concern for another nation and people undergoing the agony of what Ireland once had to endure: Ukraine.

This year, perhaps “Irish Eyes” can also be a prayer: May Ukraine have once again that “spring-time of life that is the sweetest of all”; may Ukraine, ultimately, have “no real care or regret.” And “while spring-time is ours,” may it be theirs; and when that day comes once again, they will have a chance to smile with no more tears in their eyes.