Why Republicans are running from the end of Roe v. Wade in Texas. – Slate 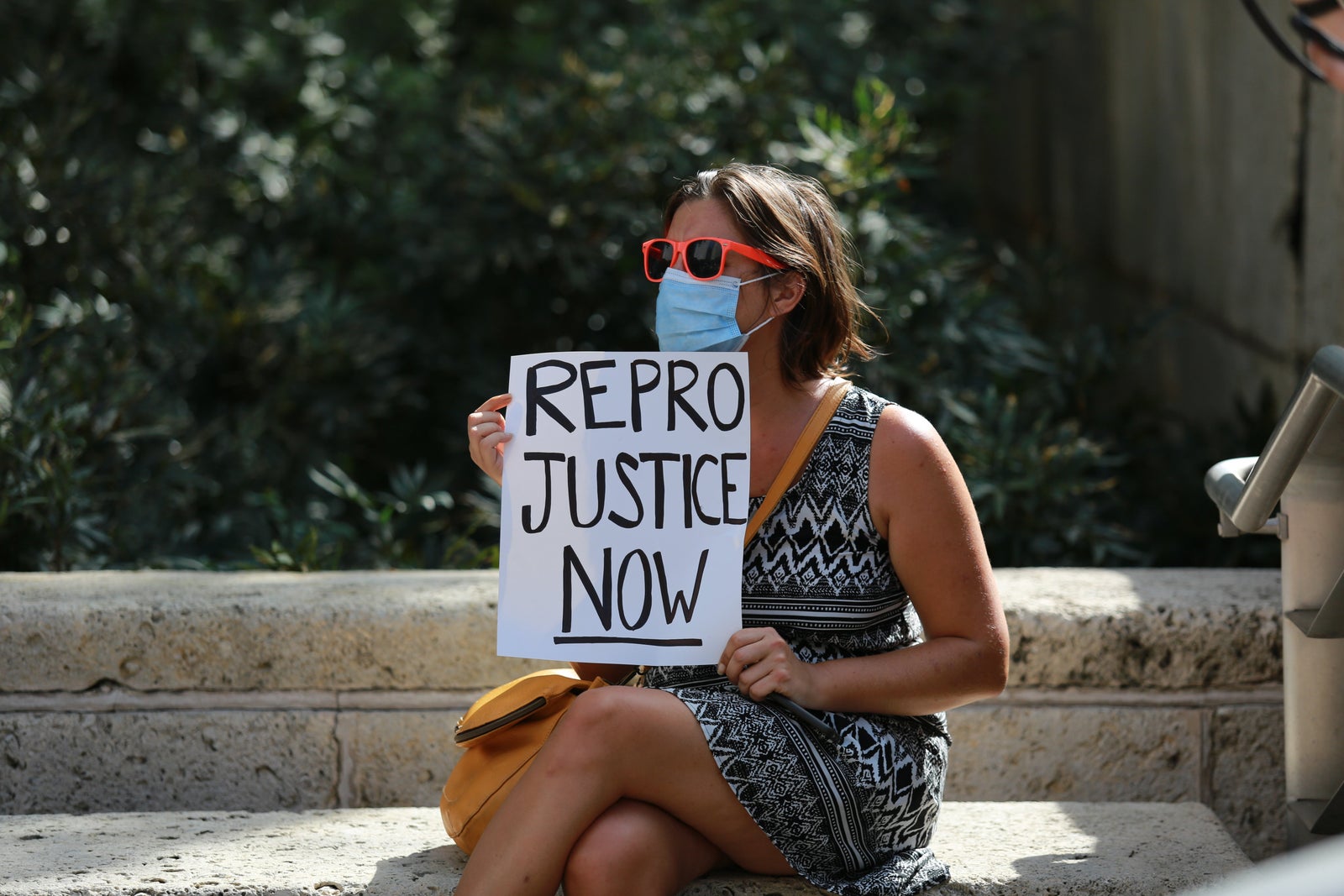 On Sept. 1, the anti-abortion movement won its most substantial legal victory in nearly half a century. But most Republicans don’t actually want to talk about it. Instead, the GOP’s reaction to Texas’ six-week abortion ban—which took effect at the beginning of the month after the Supreme Court refused to block it—has been silence, punctuated by lies about the law itself. Despite the Republican Party’s decadeslong crusade against Roe v. Wade, the vast majority of GOP politicians declined to celebrate, or even note, Roe’s functional demise. Why?

The most obvious answer is that Republicans are now the dog that caught the car, fearful of the political ramifications of their own victory. Indeed, it seems undeniable that Republicans did not anticipate this abrupt triumph over Roe, instead assuming that the Texas law would be blocked by the courts. After all, hundreds of similar laws were blocked by the courts for years. Their decision to downplay this victory should upend the conventional wisdom about Roe not just politically, but also from a constitutional perspective.

For years, conservative lawyers have argued that the Supreme Court should not uphold pro-choice precedent because it is unsettled, unstable, and unworkable. As evidence, they cite the fact that red states continue passing all manner of abortion restrictions to contest the legitimacy of Roe as settled precedent. But the GOP’s reaction to the Texas law suggests that this analysis has it backward. What if Republicans only continued to pass abortion restrictions because they knew the laws would get struck down? What if the passage of these laws proves that Roe is such a settled, stable, and workable precedent that legislators think they can pretend to defy it without worrying about the consequences?

When the Supreme Court handed down Roe in 1973, the decision was not nearly as controversial as it is today. It was decided by a 7–2 vote with four Republican-appointed justices in the majority. The public reaction was initially muted but grew more polarized in the following years as the political and religious right seized upon abortion as a cause célèbre. Under Ronald Reagan and George H.W. Bush, the Department of Justice urged the Supreme Court to overturn Roe, but it refused in 1992’s Planned Parenthood v. Casey.

Every year that passed with Roe and Casey on the books, the argument for overturning the constitutional right to abortion seemed to grow weaker. The Supreme Court’s doctrine of stare decisis requires respect for precedents, especially those with deep roots upon which the nation has come to rely. As the court explained in Casey, “people have organized intimate relationships and made choices that define their views of themselves and their places in society in reliance on the availability of abortion.” These profound “reliance interests” counsel against SCOTUS pulling out the rug from underneath millions of Americans by eradicating their right to terminate a pregnancy.

As Roe grew increasingly entrenched in American law and life, anti-abortion advocates adopted a different argument to contest its validity as precedent: The argument that it is not stable because state legislatures continue passing laws designed to undermine or flout it. Chief Justice John Roberts appeared to endorse this idea when he laid out his grand unified theory of precedent in a concurring opinion to 2010’s Citizens United v. FEC. Roberts wrote that the Supreme Court should not adhere to precedent if it is “so hotly contested that it cannot reliably function as a basis for decision in future cases.” The “simple fact that one of our decisions remains controversial” does not, by itself, “justify overruling it,” the chief justice noted. But he added that this controversy “does undermine the precedent’s ability to contribute to the stable and orderly development of the law.” In these cases, it is “entirely appropriate for the court” to “consider new approaches”—that is, to overrule it.

Republicans created the impression that Roe was “unsettled” and “unstable” while relying on its status as settled, stabled law.

Many conservative commentators believe Roberts wrote this opinion with Roe “in his cross-hairs.” Conservative litigators picked up on his hint and began filling their briefs with arguments against Roe’s stability. When 207 members of Congress urged the Supreme Court to “reconsider” Roe in 2020’s June Medical v. Russo, they zeroed in on this claim, saying they could dismiss the precedent because it is “unsettled” and “unworkable.” Other anti-abortion groups echoed Roberts’ concurrence, as well; Americans United for Life, for instance, alleged that “growing legal protection for prenatal human life”—that is, an endless stream of abortion restrictions—has “kept Roe radically unsettled.” And because it is so unstable, the Supreme Court should not award it any respect as precedent.

These arguments, however, failed to mention a key fact: Legislatures passed all these restrictions knowing that the federal judiciary would safeguard the core right to abortion. They did not have to face the political backlash that might result from the closure of every abortion clinic or the prosecution of patients who terminate illegally. As the implementation date for each new law loomed, clinics would race to court to obtain an injunction. Judges would oblige, and Republicans would rail against their rulings—and fundraise off the outrage they fomented. At the next legislative session, they’d repeat the process, creating an endless cycle of anti-abortion fervor that never resulted in the prohibition of abortion.

Now the Supreme Court has broken that cycle. By a 5–4 vote, it allowed Texas’ six-week abortion ban to take effect, allowing the state to outlaw virtually all abortions for the first time since 1973. The state’s clinics have stopped providing abortions to all but the rare patient at an extremely early stage of pregnancy. Yet few of its members are willing to acknowledge this new state of affairs. Senate Minority Leader Mitch McConnell dismissed the Supreme Court’s effective abandonment of Roe—a key aim of his ruthless drive to capture the federal judiciary—as a “highly technical decision.” Texas’ Republican senators, Ted Cruz and John Cornyn—normally so vocal about their hostility to abortion—were silent.

At first, so was Gov. Greg Abbott, who signed the Texas ban into law. When Abbott did finally comment on the law, he lied about it, claiming that “it provides at least six weeks for a person to be able to get an abortion.” Abbott’s comments can only be seen as an attempt to insist that women can still access abortion care in his state. This allegation is objectively false: A patient is “six weeks pregnant” just two weeks after her first missed period. Many pregnancy tests may not even turn up positive until several days after a patient first misses her period. In reality, then, Texans have two weeks, at most, to get an abortion. No wonder more than 85 percent of abortion patients have passed the six-week mark.

Other Republicans’ assertions about the bill are equally laughable. GOP Sen. Bill Cassidy insisted that “if it is as terrible as people say it is, it’ll be destroyed by the Supreme Court.” (Except … it wasn’t.) He even declared that the court’s decision to let the law take effect was “clearly not an assault … upon Roe v. Wade.” (It was.) Why was Cassidy—who purports to support the reversal of Roe and the prohibition of abortion—so eager to convey his confidence that SCOTUS would uphold Roe and block Texas’ bill?

The most likely answer is that Cassidy, like most members of his party, have long assumed that Roe would serve as a guardrail against their most extreme anti-abortion legislation. They created the impression that Roe was “unsettled” and “unstable” while relying on its status as settled, stabled law to score political points. They pretended it was an “unworkable” precedent then trusted courts to enforce its obvious commands at the expense of their own legislation. Put simply, Republicans could only create the impression of Roe’s instability because it was so stable.

Now, thanks to their own crusade, that stability is in serious peril. The GOP has succeeded, for the first time in almost half a century, in outlawing almost all abortions in a state. And now, Republicans are running scared from the consequences of their own actions. Before the Supreme Court’s conservative justices pronounce Roe fatally unsettled, unstable, and unworkable, they should look at Republicans’ reaction to their own ostensible triumph in Texas. At long last, GOP lawmakers have achieved an end run around the constitutional right to abortion. And now, they have never been more desperate to convince the country that Roe is settled precedent.