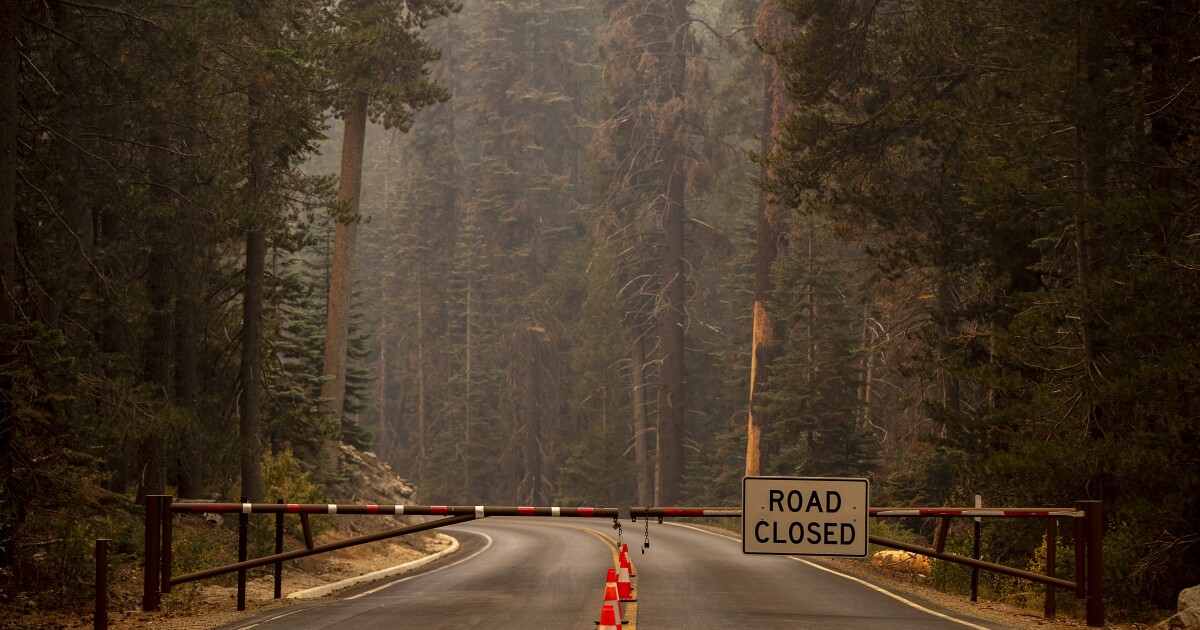 A lightning-sparked wildfire in Sequoia National Park has scorched the edge of the Giant Forest, home to some 2,000 giant sequoias that includes one of the world’s largest known trees.

The KNP Complex fire on Friday burned through the westernmost tip of the forest off General’s Highway near the Four Guardsmen, a grouping of giant sequoias that mark the forest’s entrance, said Steven Bekkerus, public information officer with the Southern Area Blue Team. The forest is located east of Fresno.

The bases of the trees had been wrapped in protective foil that can withstand high heat and is typically used to guard structures against flames, he said, but it wasn’t clear how intensely the fire burned through the area or how the trees fared.

Giant sequoias are considered one of the most fire-adapted species on Earth, but experts say the drought-stressed trees are increasingly no match for massive, high-intensity blazes stoked by climate change and a buildup of dry vegetation in western U.S. forests.

Crews were able to get into the area later Saturday, after they cleared General’s Highway — the only way in and out of the forest — of falling rocks and flaming vegetation that had rolled onto the road, Bekkerus said.

That came as the two fires that comprised the complex — the Colony and the Paradise fires, which were sparked by a Sept. 9 lightning storm — merged overnight, swelling to 17,857 acres and making a run to the north and northeast. Firefighters reported 0% containment.

As of Saturday afternoon, the fire had not affected most of the Giant Forest, including the famed General Sherman tree, believed to be the largest in the world by volume, Bekkerus said. The tree is on the north end of the forest.

Authorities were not sure whether flames would reach there later in the day.

“We don’t know exactly what will happen today,” Bekkerus said. “Today may be an active fire day.”

Fire activity started to increase around 2 p.m. Friday, when the wind picked up and a smoke inversion lifted, allowing the sun to heat up the vegetation, Bekkerus said.

“We actually had to pull our crews out for safety reasons,” he said.

Crews were back out fighting the fire Saturday morning, he said. They were also protecting structures in the cabin communities of Mineral King and in Three Rivers, where over 100 homes were threatened, he said.

There were 416 personnel assigned to the incident, with more resources on order, Bekkerus said.

“This is one of the highest priority fires in the country right now, so we are trying to wrap those resources up and get what we need,” he said.

“All that in combination could lead to extreme fire behavior,” he said.

The critical fire weather conditions were expected to persist through most of the weekend, with the warning set to expire at 8 p.m. Sunday, he said.

“Any time you have significant wind events, those are difficult,” Bekkerus said. “There’s not much we can do to stop that.”

Crews had been working for the past week to prepare the Giant Forest for fire by wrapping trees, including General Sherman, in protective structure wrap and raking vegetation from around their bases.

Hotshots specially trained in setting low-intensity fires were also lighting off duff around the trees, he said.

The Forest Service has been conducting controlled burns in the sequoia groves since the 1960s to remove excess vegetation that could help fire burn hotter and carry it up into the crowns of the trees, Bekkerus said. They’ve been challenged by resource limitations and the fact that the windows to conduct the burns have grown narrower due to rising temperatures, dwindling precipitation and longer, more active fire seasons.

Still, authorities hope that history will help ensure that if the fire does burn through the rest of the forest, it will do so at a low enough intensity to be beneficial to the towering giants, which have bark that’s up to 2 feet thick, branches that reach above flames and cones that release seeds when exposed to a burst of heat.

“It is important to remember that these trees are thousands of years old,” Bekkerus said. “They are used to fire.”

A giant sequoia can survive a wildfire if just 5% of its crown remains unscorched. At the same time, Bekkerus noted, the trees can still succumb to blazes that burn hot enough, particularly amid hot, dry conditions that have left them more vulnerable to begin with.

“We are currently in a historic drought, and these trees are stressed,” Bekkerus said.

Giant sequoias grow only on the western slopes of the Sierra Nevada, where there are roughly 70 groves. Last year, the Castle fire burned through portions of about 20 of those groves with such an intensity that it caused some trees’ crowns to combust and destroyed their cones rather than helping them release seeds. Researchers estimate the fire killed 7,500 to 10,600 trees — 10% to 14% of the world’s natural population.

The Giant Sequoias Land Coalition of federal and state agencies, universities, tribes and conservationists is now working to put together a plan to ensure the trees’ long-term viability in the face of what has become an existential threat, Bekkerus said.

He noted that the giant sequoia is an iconic symbol of the nation’s open spaces and is prominently featured in the National Park Service logo.

“This is the second-oldest park in the country after Yellowstone, and the reason for the park is the sequoia trees,” he said. “So these are very important resources we are working hard to protect.”