Will God answer our prayers about climate change? Catholics in Glasgow await an urgent climate meeting 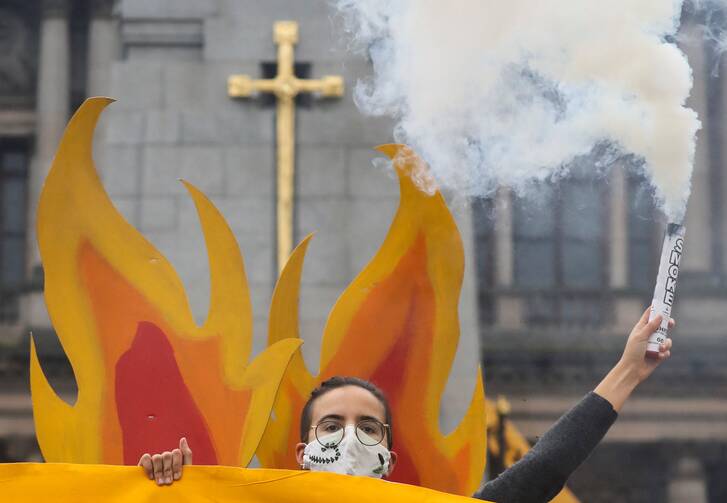 They say that forthcoming events cast their own shadow, and as autumnal rain clouds roll in off the gray hills around Glasgow and Scotland’s central belt, there seems as much shade as light in Scotland’s biggest city. The opening of COP26, the United Nations’ annual “conference of parties” on climate change, looms.

Catholics in Scotland were dismayed to hear that Pope Francis won’t be joining us for COP26, even as a high-powered delegation led by Cardinal Pietro Parolin will meet many world leaders and activists for this latest, critical conference on climate change. (A small, surprising last-minute compensation: Pope Francis offered the “Thought for the Day,” a popular slot on the BBC Radio 4’s national morning news program, on Oct. 29.)

Passing the epicenter of the conference site brought a sudden sense that this is finally for real. The “Blue Zone” at the city’s slick Scottish Exhibition Campus on the Clyde riverside is off-limits to ordinary people and causing traffic disruption across the city. The police and security presence is not overwhelming, but everyone knows that it is there, preparing the site for up to 100 world leaders, including U.S. President Joe Biden, who will gather for one of the biggest and potentially most far-reaching events ever held in Scotland.

The people of faith in Glasgow, many energized by the social-teaching document of Pope Francis, “Laudato Si’,” know that they can act as catalysts of change.

A notable feature in recent weeks has been the energy and breadth of engagement by faith groups, prominently featuring often quite lengthy pilgrimages to Glasgow for the conference. Overnighting in people’s homes or the hard floors of church halls, thousands of eco-pilgrims will converge on the city by the last day of October, when COP26 officially begins. Liturgies, multi-faith gatherings and services are already being held.

The large Jesuit church of St. Aloysius in central Glasgow will host the COP26 delegates’ Mass halfway through the conference. The celebrants will include all Scotland’s seven Catholic bishops. And many churches and people from the city’s different faiths and community groups will participate in a large march on Nov. 6.

We are learning these days that the redemption we Christians like to talk about applies to the whole of creation, not just to the individual soul somehow disconnected from the commonweal. None of the pilgrims and protesters know if they will be able to get close enough to the leaders and delegates to get that message across, but there will be many demonstrations and marches that will try. The people of faith in Glasgow, many energized by the social-teaching document of Pope Francis, “Laudato Si’,” know that they can act as catalysts of change.

The redemption we Christians like to talk about applies to the whole of creation, not just to the individual soul somehow disconnected from the commonweal.

The conference’s riverside site lies on a stretch of once industrial land where the Finnieston Crane casts a long shadow, a giant memento of the Clyde’s storied industrial and shipbuilding past. This 175-ton, 53-meter cantilever crane was once used to hoist massive steam locomotives from the city’s foundries and factories onto ships bound for every continent. Farther downstream there remain three other cranes, preserved from the days of Glasgow’s industrial past.

River dredging and widening, as far back as the 17th century, created the conditions for the growth of the city’s heavy industry, its strong working-class politics and its tradition of trade-union activism. The labor and skill of working people made Glasgow and Clydeside worldwide bywords for heavy industry and engineering quality.

Now we are coming to see what those generations of hardworking shipbuilders and engineers never could, that their memory would be preserved not only by these majestic cranes but by the long-term effects on the climate of what they began in those days, an issue to be discussed with some urgency at a gathering of world leaders on one of the very sites of their labors.

As one local environmental group has been asserting: What Paris COP21 promised, Glasgow must deliver.

A few days before the conference officially launches, the city faces an array of difficulties. A train drivers’ strike, which would have thrown plans to transport up to 30,000 visitors into disarray, was averted at the last moment.

But not every problem is Glasgow’s doing. Neither the city administration nor the Scottish government are running this event—it is officially a U.N. conference sponsored by the United Kingdom and Italy. There have been news leaks for weeks that U.K. government staffers, organizing events from 400 miles away in London, have not been up to the task.

There is greater concern about the risks of Covid-19. Already delayed a year because of the pandemic, COP26 threatens increased numbers of cases in Glasgow. The Scottish government admits that a Covid-19 spike is almost certain, especially worrisome for the Health Service as winter approaches.

The government has expressed optimism that sufficient mitigations will be in place and that Glasgow’s medical capacity will not be overwhelmed by any surge. Scots have been good at wearing masks on public transport and in enclosed spaces such as shops and pubs. A test-and-trace phone app, after initial teething troubles, works well.

A notable declaration by a coalition of faith leaders raised hopes far afield from Glasgow—the largest-ever divestment by faith groups, including the Catholic Bishops’ Conference of Scotland, from the fossil-fuel industry. The Scottish Church’s National Commission for Justice and Peace said that the bold move “encourages Catholics everywhere to take action to protect the environment for future generations.”

Media here favorably assessed the Catholic bishops’ divestment move, part of a global commitment that includes $4.2 billion of managed funds and 72 faith institutions. The prayer now is that the enormity of what is at stake will overcome lingering doubts about the need for action, not to mention local annoyance about traffic disruption for a few weeks.

As one local environmental group has been asserting: What Paris COP21 promised, Glasgow must deliver. The Edinburgh-based activist Patrick Dunne and his team at 1.5 Degrees Live! organized a continuous reading of the recent, devastating “Code Red” report from the United Nations’ Intergovernmental Panel on Climate Change at the forecourt of the Scottish Parliament. He told America that COP26 “must deliver real and meaningful emission reductions and not just clever accounting.”

Will God answer the many prayers raised for COP26 in countless places of worship worldwide this weekend? Will the planet’s leaders accept what they must do?

Mr. Dunne argues that, beyond greenhouse gas reductions, what is also at stake in Scotland is “a framework of justice for the global community and a pathway of change in our economic system,” one that has proved “so harmful to ecosystems and genocidal to Indigenous people the world over.”

Activists like Mr. Dunne accept the force of a similar argument presented by Pope Francis through his constant emphasis on “integral ecology,” that how we treat our “common home” mirrors and reflects how we treat each other, as we confront what the pope has often described as a “throwaway culture.” Through that lens, the climate emergency appears as much social as environmental, a matter of justice. Mr. Dunne noted the urgent need for COP26 to end “the current exploitation of people and planet for profit.”

In just a few more days, it all begins. The River Clyde and Glasgow—its brave, friendly, boisterous old city, Scotland’s largest—know that they hold the world’s attention and the world’s hopes too. Voices of faith here are prominent and deeply engaged; it feels at this moment that everyone, whether inspired explicitly by faith or just by a deep concern for our planet and our future generations, is praying for success.

Will God answer the many prayers raised for COP26 in countless places of worship worldwide this weekend? Will the planet’s leaders accept what they must do?

The Most Rev. Bill Nolan, bishop of the Diocese of Galloway in Southwest Scotland and chair of the Scotland bishops’ Justice and Peace Commission, told one of several preparatory gatherings that the God of justice and peace for the poorest will be present in these talks. Bishop Nolan expressed the hopes of many, asking us to believe that “God will be with everyone at COP26 who says something or does something that does not destroy, but enhances creation.”

The whole world, especially in the poorest places that are already feeling the effects of the climate emergency, will want to echo the hope for COP26, as it finally begins at Glasgow on the Clyde, that it will end in light, not shadow.