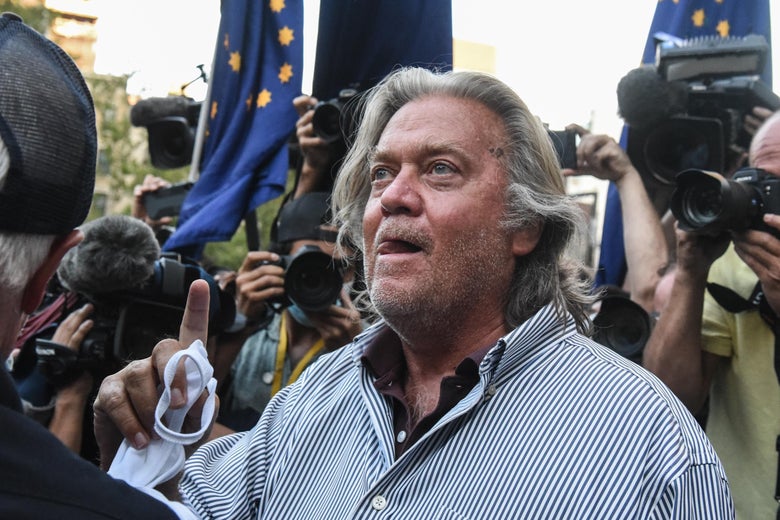 On his last day in office, Donald Trump pardoned his adviser Steve Bannon for having committed the crime of fraud. In 2018 and 2019, Bannon defrauded donors to a private fundraising campaign to build a wall at the Mexican border called We Build the Wall. It took less than 10 months from the pardon for Bannon to be caught breaking the law again: The House select committee investigating the Jan. 6 insurrection announced on Thursday that Bannon has illegally defied its subpoena and will be referred to the Department of Justice for criminal contempt.

Should Bannon continue to defy the committee, as his attorneys have stated he would, Attorney General Merrick Garland will have to decide whether to hold Bannon accountable. Given Bannon’s obvious disdain for the rule of law, Garland should prosecute him to the fullest extent of the law and seek from a D.C. jury the maximum punishment of one year in prison and a $100,000 fine. That process will begin on Tuesday, when the select committee will hold a vote on whether to adopt a contempt report, which would be referred to the full House of Representatives for a vote. If the House votes in support of the contempt resolution, Speaker Nancy Pelosi would then send it to the U.S. attorney for the District of Columbia and it would then be up to Garland to determine if, when, and how to prosecute the case.

“Mr. Bannon has declined to cooperate with the Select Committee and is instead hiding behind the former President’s insufficient, blanket, and vague statements regarding privileges he has purported to invoke,” Chairman Bennie G. Thompson said in a statement. “We reject his position entirely. The Select Committee will not tolerate defiance of our subpoenas, so we must move forward with proceedings to refer Mr. Bannon for criminal contempt.”

As I wrote last week, Garland must act here, lest those responsible for the Jan. 6 insurrection be given impunity to attack democracy again. “The law here is absolutely plain, I think that these guys have to come, there couldn’t be anything plainer,” former prosecutor Frank Bowman told me last week about the subpoena for those who participated in Jan. 6. “The question is whether or not Garland’s people will enforce it.”

While recent attorneys general have refused to prosecute contempt referrals under 2 U.S.C. §§ 192, 194, that has only happened when the presidents who the executive officials subpoenaed were serving were still in office. Trump is no longer in office (and Bannon was never an executive official anyway). Indeed, the committee is asking Bannon to testify to more than his conversations with Trump, which means his complete snubbing of the committee has no possible lawful basis. (Some of his testimony might be protected by executive privilege on very specific questions, but even that would be a stretch given that Bannon was not an executive branch official at the time of Jan. 6, Trump is no longer the president, and the current president has not asserted executive privilege in this case. Also, executive privilege doesn’t cover criminal conspiracies such as is possibly being investigated here.)

Bannon was one of the loudest promoters of the Jan. 6 rally that turned into the deadly assault on the Capitol. “All hell is going to break loose tomorrow,” he told his War Room podcast on the eve of the rally. “It’s all converging, and now we’re on the point of attack tomorrow. … And all I can say is: Strap in. You have made this happen, and tomorrow it’s game day.”

As ABC News reported earlier this year, Bannon could have significant information as to the planning of the rally and his own expectation that “all hell is going to break loose.” The rally was co-organized by “March for Trump,” which Bannon sponsored during a December cross-country bus tour.

As ABC News reported at the time:

In public, Bannon repeatedly used his platform to promote the Jan. 6 rally, hosting rally organizers on his podcast at least 16 times amid the push to overturn the election results.

Two days before the rally and subsequent attack on the Capitol, Kylie Jane Kremer of rally sponsor “Women for America First” appeared on Bannon’s “War Room” podcast to promote the event. “President of the United States, as we know right now, tentatively at 11 he’s going to come and address the nation and then it’s gonna be—the game is going to start on Capitol Hill,” Bannon said. “I think one of the most historic days in American history will be Wednesday.”

ABC News further noted that two former Breitbart writers who worked on Bannon’s “We Build the Wall” campaign played prominent roles in organizing and doing media for the Jan. 6 rally that turned into the insurrection. All of this is pertinent to the select committee’s legitimate investigation of a violent assault on its own members and the very seat of government.

Should Garland fail to quickly initiate a contempt prosecution against Bannon once it gets to his doorstep, it will be a signal that Trump loyalists will continue to have impunity in breaking the law. It could also be an invitation for them to commit more crimes against the democratic process in the future.

“If you get subpoenaed, you don’t get to just not show up because you don’t want to show up,” former Deputy Attorney General Donald Ayer told me last week. “Letting people thumb their nose at this obligation comes at a very high cost to respect for the law.”

While Bannon did not appear in front of the committee as required by law on Thursday, on Wednesday evening he was not far from the Capitol, campaigning for Republican Virginia gubernatorial candidate Glenn Youngkin and repeating Trump’s claim, which inspired the insurrection, that the election had been stolen from him. During the Bannon rally, the crowd recited the Pledge of Allegiance to an American flag carried by Trump supporters during the Jan. 6 rally that turned into the insurrection.