Oil prices rose for the seventh straight day today (longest streak in two years), with a weak dollar helping bail out an early drop in WTI to its highest since January 2020.

Saudi Arabia’s decision to unilaterally cut production in February and March “was a game-changer, which has removed oversupply concerns in the short term.”

Analysts expected a modest draw last week to make the 3rd weekly drop in crude stocks in a row and API confirmed with a bigger than expected 3.5mm draw. However, gasoline stocks saw the biggest build since April 2020, suggesting demand may not be as robust as some hoped… 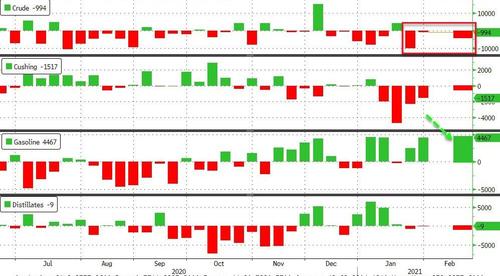 WTI traded around $58.40 ahead of the API print, popped higher initially (crude draw) but faded as the gasoline build data became obvious… 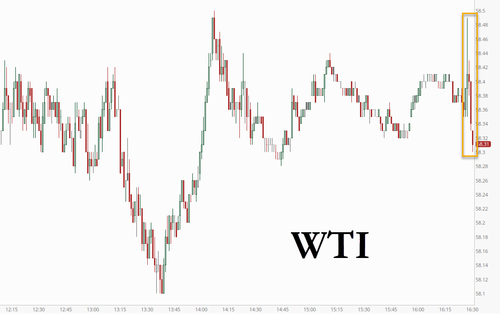 “There is, to some extent, a limit on the upside to prices,” said Rob Haworth, senior investment strategist at U.S. Bank Wealth Management. “We still have a lot of OPEC supply to come onto the market, and the faster prices go higher, it implies OPEC is going to bring back supply sooner.”

Previous post: [ Americans Have Never Been More Dissatisfied With How The Country Is Functioning Than They Are Right Now ]
Next post: [ Lyft Jumps Despite Continued Customer Plunge As Revenue Per Rider Jumps ]