You’ve probably never heard of a noise musician, but this one might just shock you into a new understanding of God 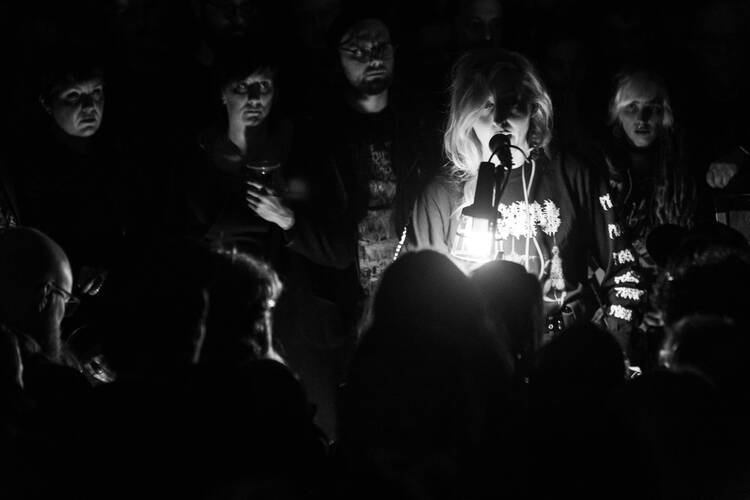 From Madonna to Lady Gaga and Black Sabbath to Bathory, popular musicians have used Christian imagery for a number of ends, from serious artistic critique to easy shock value. But on her 2021 album “Sinner Get Ready,” the noise musician Lingua Ignota subverts Biblical language in a way Catholic listeners may find not merely shocking, but spiritually resonant. More importantly, her work illuminates the diversity, complexity and difficulty of traditional Christian symbolism from a perspective that’s too often ignored, but vital for Christians to hear.

“Lingua Ignota” is the stage name of Kristin Hayter and a Latin translation for the “unknown language” invented by medieval mystic Hildegard von Bingen. A typical track finds her classically trained mezzo-soprano voice wavering queasily between registers, one moment soaring like a church cantor’s and the next exploding into apocalyptic black metal screams, all over hypnotic yet disorienting echoes of church organs, power electronics and what some might consider just “noise”—a rollercoaster of enchantingly expressive music that challenges the bounds of conventional “music” and aims to give voice to Hayter’s own experiences as a domestic violence survivor.

On her 2021 album “Sinner Get Ready,” the noise musician Lingua Ignota subverts Biblical language in a way Catholic listeners may find not merely shocking, but spiritually resonant.

Lingua Ignota’s work draws heavily upon her survivorship, and she’s used her platform to raise money and awareness for domestic abuse prevention. Oftentimes, she does so through use of religious imagery and symbolism: Hayter grew up Catholic and has repeatedly expressed interest in and fascination with Christianity.

To this end, her lyrics are highly relevant for believers. Rather than straightforward autobiography, Hayter frames her experience of trauma through the language of Christianity. On “The Order of Spiritual Virgins,” the opening track to her album “Sinners Get Ready,” Hayter finds empowerment through assuming the role of a wrathful Old Testament God: “Hide your children, hide your husbands/ I am relentless, I am incessant, I am the ocean/ And all who dare look upon me/ Swear eternal devotion.” But by the next track, “I Who Bend the Tall Grasses,” she is a supplicant, beseeching God to smite her abuser, in language that recalls the desperate pleas of Job or the Psalmists: “Glorious Father, intercede for me/ If I can’t hide from you, neither can he/ Always your voice bites the back of a cold wind/ And the tall grasses bend for you…Just kill him/ you have to/ I’m not asking.” Elsewhere, perhaps most disturbingly, she casts her abuser as God, and herself as a sinner pressured to repent: “No wound as sharp as the will of God…He will take your legs and your will to live /If you do not confess now.”

As the religious person experiences God in silence, yet feels compelled to voice their experience, Lingua Ignota seeks to give voice to the language-defeating experience of trauma.

There is more at work in Hayter’s religious language, though, than the fruitfully provocative questions raised even by merely connecting her experience of gendered violence to the church’s traditional metaphor for God, that of an all-powerful male figure. The various roles she inhabits can be seen as modulations of an extended metaphor around which the whole album coheres—a metaphor she alludes to in a sample from the History Channel series “Alone” at the end of “The Order of Spiritual Virgins.” In that sample, a man talks about his experience of silence, enjoyed alone in church: “I just love to hear the dead silence…in the silence you can hear your departed mother sing a hymn in church from 30 years ago, that’s what you get out of the silence.” But rather than remaining silent, he hums that hymn—Alan Jackson’s interpretation of “Standing on the Promises of God.” As the religious person experiences God in silence, yet feels compelled to voice their experience, Lingua Ignota seeks to give voice to the language-defeating experience of trauma.

In her seminal work Metaphorical Theology, the feminist theologian Sallie McFague points out that the typical structure of a metaphor is to illuminate something “lesser-known,” like an abstraction such as love, with something “better-known”—specific, concrete and sensory, such as a rose. There is obvious utility for metaphors in Christianity, then—they provide a way for the faithful to speak about that ultimate unknown, the transcendent God. Thus Christians have traditionally sought to understand the nature of “God,” a reality beyond human comprehension, through the lens of something comprehensible: a “Father.”

Catholics cannot accurately speak about the nature of God without speaking about trauma, specifically the trauma of violence.

Yet Lingua Ignota reverses this structure, using language about the transcendent God to understand her concrete, human experience of trauma. This seems to me a mode of religious language entirely appropriate for Catholics, whose belief centers on the Incarnation—a transcendent God, the ultimate reality in which all things “live, move, and have their being,” becoming fully embodied in a particular person’s traumatic experience of political violence. This belief would seem to imply Catholics cannot accurately speak about the nature of God without speaking about trauma, specifically the trauma of violence, and that we might judge the accuracy of our language about God by its applicability to the experiences of those who have survived violence.

This raises questions about which voices are given prominence in the church, and which are dismissed or neglected. How might the church’s traditional metaphors for God resonate (or fail to resonate) with the experiences not only of women, but of L.G.B.T. people, who are four times more likely than non-L.G.B.T. people to be victimized by violent crime, or of those subject to religious and racial violence? And where they fail to resonate, is there room to forge new metaphors that better capture the experience of those who, like Jesus himself, are marginalized and victimized?

Where they fail to resonate, is there room to forge new metaphors that better capture the experience of those who, like Jesus himself, are marginalized and victimized?

Some might dismiss the idea of finding new metaphors for God, fearing that personal experience and subjectivity will move the church away from its root beliefs. Yet as McFague points out, embracing varied metaphors for God is not lazy relativism, nor does it mean assigning equal value to anything that might be said. Instead, it is an act of humility to question the limitations of the church’s traditional language and an act of charity—indeed, solidarity with Christ—to expand that language when needed to account for the experiences of those most likely to suffer violence.

“Sinner Get Ready” is a powerful, viscerally-felt reminder that our willingness to speak about trauma and listen to those who are surviving is a measure of our willingness to experience the reality of God beyond words. It’s also a reminder that our words and metaphors can at times become idols, and are in constant need of renewal from the margins.