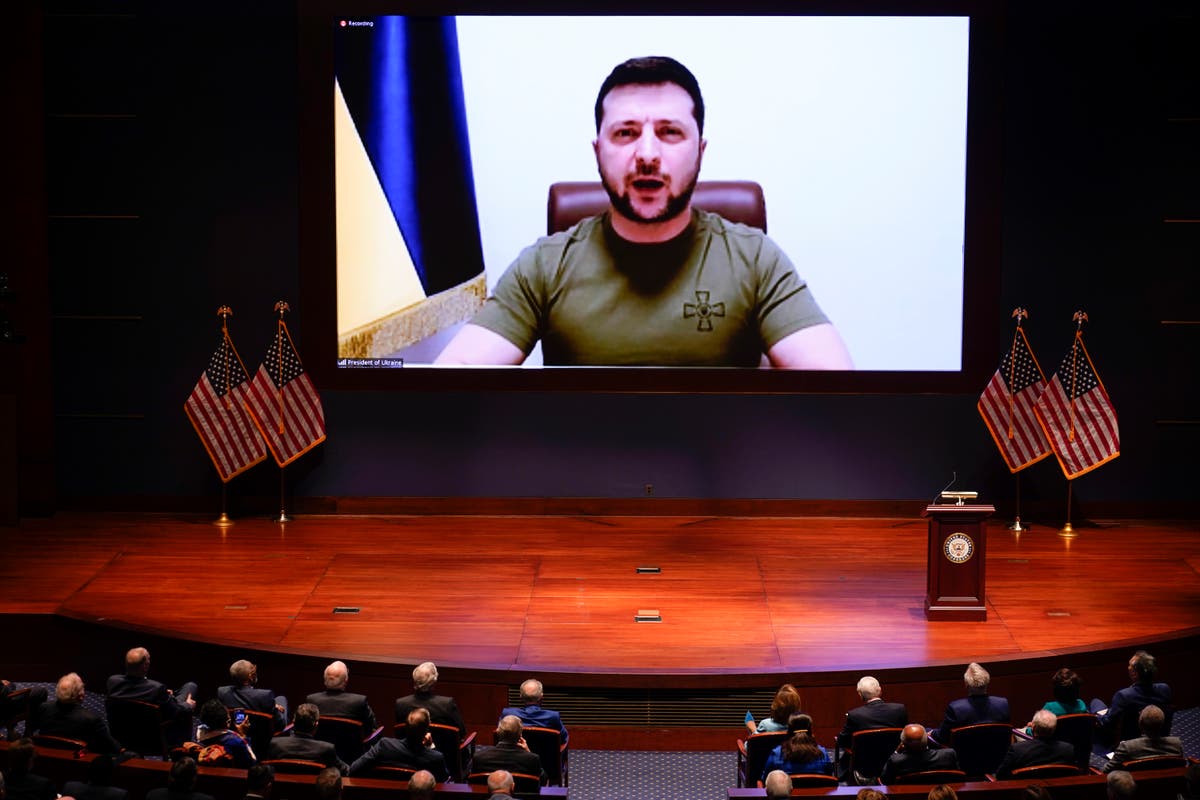 Ukrainian President Volodymyr Zelensky has addressed the US Congress virtually after being invited by House Speaker Nancy Pelosi and Senate Majority Leader Chuck Schumer. He received a standing ovation when he appeared on the screen before lawmakers.

During his remarks, he called on the US to remember Pearl Harbour and the September 11 terrorist attacks as it sees the people of Ukraine attacked and killed by Russian forces.

The Ukrainian president told lawmakers in his wartime address to Congress on Wednesday that Ukraine “experiences the same every day” now as America did during its own darkest days.

Mr Zelensky also asked Congress for Soviet-made air defence systems and fighter jets as an alternative to a Nato-enforced humanitarian no-fly zone over his country’s airspace.

US and Nato officials have so far declined his pleas for a no-fly zone over Ukraine to avoid allied planes being at risk of direct engagement with Russian aircraft, raising the possibility of a nuclear confrontation.

President Joe Biden has responded to Mr Zelensky’s remarks by announcing $800m (£612m) of new aid, bringing the total aid sent to Ukraine in the last week alone to $1bn.

Later Mr Biden referred to Mr Putin as a “war criminal” for the first time. White House press secretary Jen Psaki said he was “speaking from the heart”.

President Joe Biden told reporters in the East Room of the White House that he thought Russian President Vladimir Putin was a war criminal for his invasion of Ukraine.

Mr Biden was caught on video responding to a question from Fox News’s Jacqui Heinrich asking if the Russian president was a war criminal. Initially, Mr Biden said “no” before he came back, clarified his response to Ms Heinrich and then said “he is a war criminal”.

President Joe Biden announced addition aid to Ukraine, hours after as the embattled nation’s president appealed to Congress to enact a no-fly zone as Russia continues its assault.

Mr Biden said he listened to Mr Zelensky’s joint address to Congress in his private residence and praised the leader’s resolve.

The Republican establishment in Washington is warming to President Joe Biden’s response to Russia’s invasion, while some on the far right question whether to support Ukraine at all.

After Ukraine President Volodymyr Zelensky addressed the US Congress on Wednesday in a historic virtual speech from his secure location in Kyev, GOP lawmakers had little criticism for the embattled leader’s US counterpart – a rare respite from the hardline opposition Republican leaders have shown the White House for months.

Mr Biden made the announcement just before signing an order authorising provision of $800m in defence aid to Kyiv, bringing the total of US defence assistance authorised this week to a “historic” $1bn.

Mr Zelensky spoke to both chambers of Congress as he pushed for the United States to do more and send more armaments to Ukraine as Russia continues its war on Ukraine.

Following Ukraine President Volodymyr Zelensky’s address to members of Congress on 16 March, Republican House leader Kevin McCarthy said the US must approve MiG jets for Ukraine so officials there can create their own no-fly zone, while swiping at President Biden for what GOP leadership characterised as life-threatening delays.

“I think right now providing them the MiGs that they can create a no-fly zone,” he told reporters following Mr Zelensky’s address.

‘Our country experiences the same every day’

President Volodymyr Zelensky has called on Americans to remember Pearl Harbor and the September 11 terrorist attacks as they watch the people of Ukraine being attacked and killed by Russian forces.

The Ukrainian president told lawmakers in a passionate wartime address to the US Congress on Wednesday that Ukraine “experiences the same every day” now as America did during its own darkest days.

Ukrainian President Volodymyr Zelensky pleaded for the US Congress to support a Nato-enforced humanitarian no-fly zone over his country by playing a heartbreaking video with scenes of his country under attack by Russia.

The video entitled “Close the Sky” was broadcasted during Mr Zelensky’s remarks to a special joint session of the House and Senate on Wednesday.

Voices: Zelensky’s address to Congress was direct and disturbing

The Ukrainian president spoke of September 11th and Pearl Harbor, and reminded watching members of Congress of MLK’s ‘I have a dream’ speech before airing a highly distressing video of the situation inside Ukraine.

US ‘looking very hard’ at whether Russia ‘deliberately’ targeting journalists

US Secretary of State Antony Blinken has said the US is “looking very hard” at whether Russia is “deliberately” targeting journalists covering the war in Ukraine, after at least three have been killed and several more injured by Kremlin forces in the last few days alone.

Mr Blinken told NPR in an interview that aired on Wednesday that US officials are “documenting” Russia’s attacks and that, if they determine Vladimir Putin’s troops are intentionally targeting journalists, this will be treated as a “war crime”.

“We are looking very hard at the targeting that the Russian forces are doing, including whether they are deliberately, intentionally targeting civilians, journalists or anyone else,” he said.